What do you do when, just hours before you are about to leave the country, you get a phone call asking if you could conduct a choral symphony in just one week?

Pianist and conductor Kim Sun-wook, receiving such a call from Seoul Philharmonic Orchestra on his way to Incheon Airport on Dec. 7, asked for some time to think it over -- until he arrived at the airport.

“In those 30-40 minutes, I probably did the most thinking ever in my 34-year life,” said Kim during a press meeting on Tuesday, a day before his three-day engagement with SPO conducting Beethoven’s Symphony No. 9.

Osmo Vanska, the outgoing SPO musical director, who was scheduled to conduct Beethoven’s Ninth Symphony on Dec. 14-16, was injured in a fall on Dec. 7 and could not travel to Seoul for what would have been his last regular concert with SPO.

Taking it on meant Kim would have three days to study the score and two days to rehearse. The sudden change in schedule would also wreak havoc on his other year-end recital engagements.

After much agonized thinking, he agreed to do it. “Because it was Beethoven,” Kim said.

Kim heard a live performance of Beethoven’s Symphony No. 9 for the first time on Dec. 31, 1999, from the very first row at Seoul Arts Center Concert Hall. A fifth grader dreaming of becoming a conductor at the time, he had wondered, as he watched Chung Myung-whun lead the Korean Symphony, if he would ever get a chance to conduct the piece.

And now, he was given that chance.

Although a “newbie conductor,” as he described himself, having debuted as a conductor only last year, Kim took up the challenge.

He had led SPO in a special Liberation Day concert at Gwanghwamun Square in August and had played many times with the orchestra as a pianist since 2001.

“Our relationship goes back to 2001 or 2002,” said Kim, when asked why SPO had asked him to step in for Vanska, adding, “There is trust and faith built up over time.” Most recently, Kim and SPO were on a four-city European tour in October.

“I have played Beethoven numerous times as a pianist and I thought it would not be too difficult to transfer my thoughts as a pianist into the symphony. I have listened to the No. 9 hundreds of times,” he said.

When Kim arrived at his hotel, he found the score of the Beethoven Symphony No. 9 in D minor, Op. 125 “Choral” waiting for him.

This was followed by rehearsals on Monday and Tuesday. “Many things were settled through the rehearsals yesterday and today. It is slightly different from the usual way it is performed,” Kim said.

At 70 minutes long with an 87-member orchestra, four soloists and a choir of 119, “Choral” as performed by SPO this year is a gargantuan piece. It also a sign of a return to normalcy. The traditional year-end concert was put on stage even as COVID-19 raged on, although at much a smaller scale. In 2020, the first year of the pandemic, it was performed by a 24-member choir, four soloists, all masked, and 35 orchestra members. The following year saw a 102-strong choir, four soloists and 64 orchestra members take to the stage.

On Friday, the Lotte Concert Hall felt festive, the stage packed and the choir seats full.

“Choral,” featuring a text from German poet Friedrich Schiller’s poem “Ode to Joy” in the last of the four movements, is Beethoven’s last symphony, written when he could no longer hear. Yet, it is triumphant, singing of the brotherhood of man. Just when there seems to be no hope, the chorus of men and women burst into a resounding song of joy. Soprano Hwang Su-mi, mezzo soprano Lee A-Kyeong, tenor Mario Bahg and bass Par Jong-min joined the performance as soloists while the Anyang Civic Chorale, Seoul Motet Choir and Grande Opera Choir sang in the concert hall’s choir section.

It had been a long time since work of such scale had been put on, the stage a cauldron of sounds. Kim described the score as “burning ablaze” in his hands. He brought that energy to the performance, setting on fire the hearts of those in the audience. 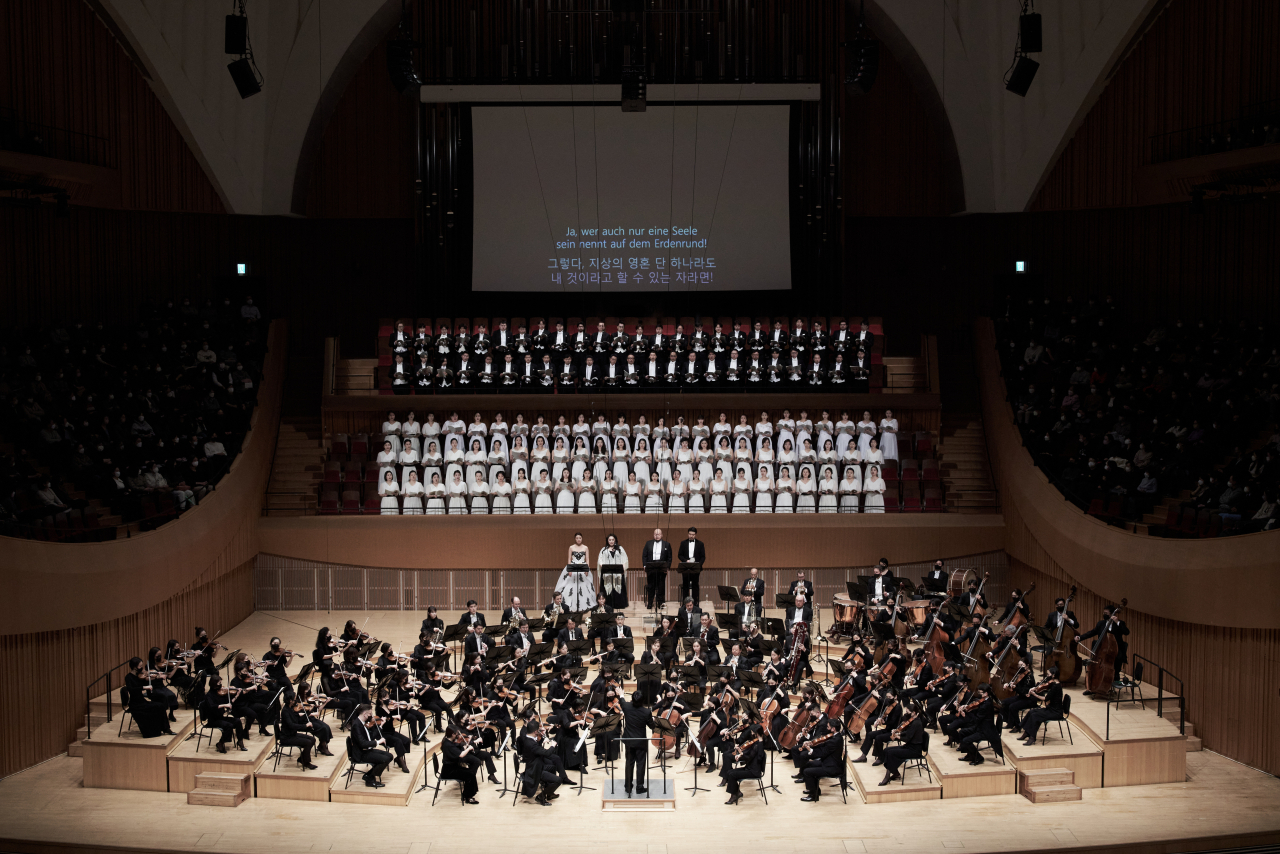