Shares of Hyundai Motor Co. and affiliate Kia Motors Corp. are on the rise since last month on robust overseas sales in the first quarter, pushing up shares of automotive parts makers and other related companies.

Hyundai and Kia announced that their global sales volume last month gained 17.9 percent from a year ago to 382,659 vehicles, and 7.1 percent to 240,457 vehicles, respectively, despite sluggish domestic sales. 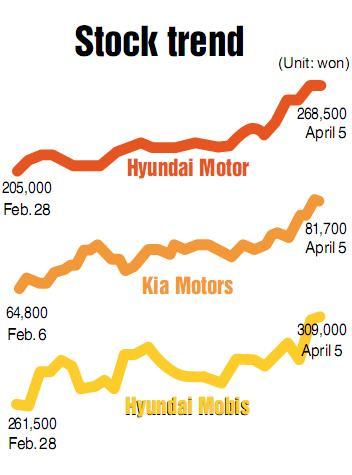 Buoyed by the strong figures, Hyundai Motor shares hit record high closing prices for two days in a row, advancing 0.19 percent to 264,500 won on Friday after a 4.1 percent gain on Thursday.

Kia Motors on Thursday broke the 80,000 won mark for the first time this year, and dropped slightly on Friday. The last time Kia Motors’ shares topped 80,000 won was in August last year.

Lim Eun-young, an analyst observing the auto sector at Dongbu Securities Co., projected that Hyundai and Kia will continue to show strong earnings through the summer.

“The peak season for car sales in the United States and Europe is from March to August, and second-quarter sales are always better than the first-quarter figures,” she said.

“Earnings of automotive parts makers, which tumbled last year on strong Korean won against the currencies of emerging markets such as Russia, the Czech Republic, Slovakia and India, will also pick up as currencies in some of the export destinations are rebounding.”

The price to earnings ratios of small and medium-sized parts makers ranged between six and eight last year, and their price to book value ratios around one.

In addition to the recovery of U.S. demand this year, Hyundai Motor is set to start running its third Chinese plant in the second half and Brazilian factory in the year end, which will increase exports of complete knock down kits.

Lee Myung-hoon, an analyst at HMC Investment Securities Co., an affiliate of Hyundai Motor, forecast that the carmaker will post an operating profit growth of 14.9 percent to 2.1 trillion won in the first three months of this year.

“There is a high possibility of Hyundai Motor reporting record sales, operating profit and net profit in the second quarter,” Lee said.

Hyundai and Kia each said U.S. sales in March were at record highs of 69,728 and 57,505 units, respectively. Separately, Hyundai said pre-orders for a new model of its Santa Fe sport-utility vehicle exceeded 10,000 units in Korea.

Hyundai Kia Corp. soared 8.7 percent on Thursday, breaking the 150,000 won mark on for the first time in about three months, and gained slightly more on Friday.

Shares of Mando Corp. rallied for four days in a row to 177,500 won on Thursday, before ebbing 0.85 percent on Friday.

Shares of other component makers such as Halla Climate Control Corp., SL Corp. and Pyeonghwa Automotive Co. are also on the surge.