Half a year has passed since Hyundai Motor Group suspended operations of its Russian plant over global logistics issues, without a clear vision for a breakthrough while global competitors have already exited the market. But market experts say Hyundai simply leaving Russia is not an answer, due to massive investment and significant market share.

According to a report recently released by Hyundai Motor Group, Hyundai Motor Manufacturing Russia shipped zero cars in August, as opposed to the 17,649 units it shipped in January. When the plant suspended operations in March due to a supply crunch, the number sharply dropped to 3,708 units from 17,402 in February. 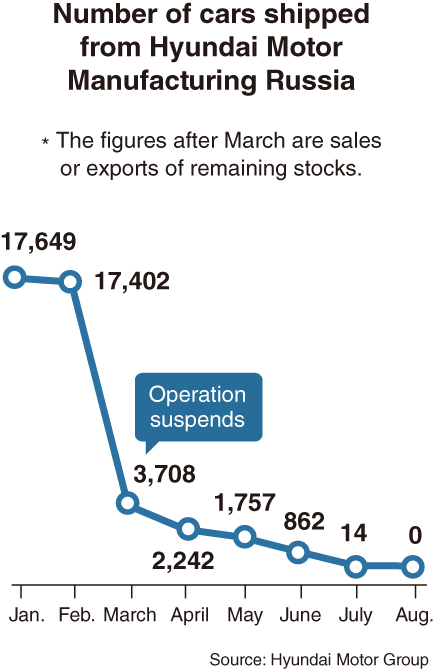 As the Russian market is responsible for not-so-small 6 percent of Hyundai Motor Group’s global sales, the automaker has made bold investment in recent years by purchasing General Motor’s old manufacturing plant at 50 billion won ($35 million) in 2020 and conducting a large-scale renovation at Kia plant. In 2019, the company announced that it would invest 640 billion won into the Russian market by 2027 to increase production volume there.

“Since then, the situation has changed a lot (compared to when the plan was announced), and it is difficult to apply such a plan now, as the situation is not being normalized,” an industry insider told the Korea Herald, adding that there is no concrete plan for resumption.

The carmaker’s plan to promote the new K9 and produce the new Sportage this year has also gone back to square one.

“But it is not that we are canceling the sales promotion and scrapping future production plans permanently -- we have made an investment based on the market’s potential,” he said.

Hyundai’s operation suspension in Russia is also creating domino effect to its affiliates and related firms there.

The effects have been felt not only by major subsidiaries Hyundai Mobis and Hyundai Wia, which combined make 530 billion won of net profit with Hyundai and Kia annually, but also the small-sized auto parts suppliers such as Sungwoo Hitech and seat material supplier Daewon Industry are facing difficulties. Hyundai Wia, which supplies auto engines, had to halt operation just five months after opening the new engine plant.

Market analysts viewed that the carmaker saw at least 300 billion won evaporate over the past six months after the operation suspension.

“Hyundai Motor Group should start looking for when would be the best time to exit the market by calculating profit and loss,” said professor Kim Pil-soo of automotive engineering at Daelim University.