BEIJING, July 15, 2021 /PRNewswire/ -- The China Media Group (CMG) and ASEAN media on Wednesday initiated a partnership which has been established to promote mutual communications at the 2021 ASEAN Media Partners Forum.

Members agreed to issue a joint statement, which aims at strengthening cooperation between the CMG and ASEAN media partners in the post-pandemic era and fostering greater regional prosperity. 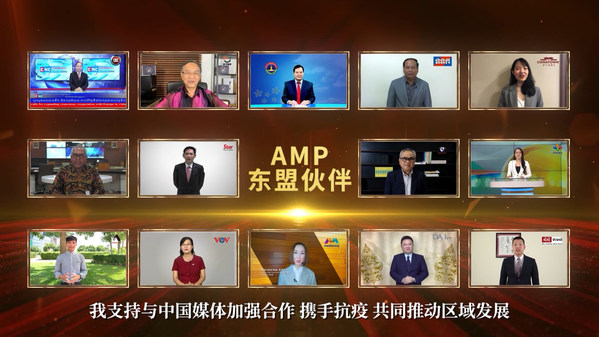 The forum was hosted by the CMG. It gathered around 100 guests from 33 organizations in China and 14 foreign countries who attended the event in person or online.

Shen Haixiong, President and Editor-in-Chief of CMG, delivered a welcome speech. Noting this year marks the 30th anniversary of the dialogue relations between China and ASEAN, Shen said the media has played an irreplaceable role in promoting steady and sustained advancement of China-ASEAN relations.

"In recent years, CMG and media organizations of ASEAN countries have been engaged in multi-dimensional and multi-level exchange and cooperation, which has effectively promoted mutual understanding and trust between our peoples," he said.

Based on these solid relations, Shen also expressed his wish to deepen practical cooperation between CMG and ASEAN partners.

"We hope to use the fruitful achievements to enrich the essence of our partnership. We are also looking forward to seeing more media organizations of ASEAN countries joining us in telling China stories, ASEAN stories and stories about China-ASEAN exchange and cooperation in an objective and faithful way," said Shen.

Martin Andanar, Secretary of the Presidential Communications Operations Office of the Philippines, said that the China Media Group and CCTV Video News Agency have been their reliable media partners. He said the forum "constantly creates more diverse avenues among participating countries to deepen their knowledge and understanding, and to promote media cooperation amidst the COVID-19 pandemic."

Alex Yeow Wai Siaw, Group Chief Executive Officer of the Star Media Group in Malaysia, emphasized that the common progress of the entire region laid the foundation of the region's future in today's interdependent world. Yeow said: "Malaysia and China have always shared close relations, allowing the media on both sides to share valuable knowledge for mutual learning."

Tham Loke Kheng, Chief Executive Officer of Mediacorp from Singapore, said in her speech the partnerships "are key to driving innovation and growth for media players across Asia. This is where we can find opportunities to grow together." She believes that creative partnerships are the key to unlocking a promising future for the media industry in ASEAN and China.

Chen Dehai, Secretary-General of ASEAN-China Centre, also expressing his confidence about the future ASEAN-China media cooperation and said in his speech, "At present, ASEAN-China relations are standing at a new historical starting point with even broader prospects." adding that, "Great potential lies ahead for media cooperation between the two sides."

Under the new partnership mechanism, CCTV+ launched a program for ASEAN partners called AgriToday, which focuses on China's world-leading agriculture technology and offers members the latest industry information and video footage. A signing ceremony was held between CCTV+, Vietnam News Agency and Vietnam Rural TV of the Voice of Vietnam. The launch ceremony for the 2021 Lancang-Mekong Mobile Cinema and the documentary Amazing Southeast Asia were also held during the forum. These projects aim to promote stronger intercultural communication among Chinese and ASEAN people.

The forum concluded with an online panel discussion, which saw Chinese and ASEAN media representatives around the theme of "Media Cooperation & Regional Development." The panelists discussed specific topics such as fighting against fake news and media bias.