By Shim Woo-hyun
Published : May 25, 2020 - 11:54       Updated : May 27, 2020 - 12:55
China’s race to enter mainstream tech is intensifying against not only the US but also its neighbor South Korea. With China aggressively pushing advancements of key technologies, Korea has been forced to take up the gauntlet before it is too late. The Korea Herald’s Tech Team has looked into four key areas to measure the technological gap between Korea and China and to offers forecasts about how the competition would develop. This is the fourth installment.

The global battle for 5G dominance between China and Korea is still in the early stages. But the competition is intense.

The 5G competition between the two nations is marked by rivalry between Huawei and Samsung Electronics, both of which are providers of end-to-end 5G solutions, ranging from chipsets and base stations to smartphones. Samsung Electronics and Huawei are also the largest 5G patent holders in the world. 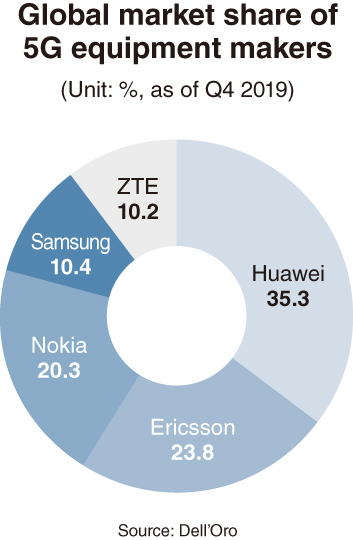 In China, there are currently about 150,000 5G stations built by major telecommunications firms. As of February this year, the number of Chinese who subscribe to 5G services reached 26 million.

Despite the potential roadblocks from the ongoing trade war between the US and China, the market share of Chinese 5G equipment firms is expected to grow, as China plans to add 450,000 stations by the end of 2020.

In the fourth quarter last year, Huawei was ranked first with a 35.3 percent market share, according to Dell’Oro’s market report.

Meanwhile, Korea’s 5G equipment manufacturer Samsung Electronics saw its share drop from 37.8 percent in the first quarter to 10.4 percent. This was because there was wide 5G network infrastructure expansion in Korea at the start of the year, before sales slowed down as demand from telecom firms leveled off.

According to the ICT Ministry, the number of 5G stations would reach at 170,000 by the end of this year, though this is less than China.

Samsung Electronics is expected to minimize the gap with Huawei by ramping up its efforts to sell its equipment to the US. Samsung has previously secured contracts to provide 5G equipment to Verizon, AT&T, Sprint and US Cellular.

In technical terms, the competition between two nations is quite close, especially when it comes to the number of patents issued by companies based in the two nations.

“When speaking of 5G dominance, the number of patents and related research papers published often indicate companies’ prospects in the market, like the major 3G and 4G patent holders controlled the related markets in previous years,” an official from a local telecom firm said.

China-based companies have the largest share in terms of the number of patent families -- both granted and nongranted patent applications -- according to the research firm Iplyptics’ latest 5G report commissioned by the German Federal Ministry for Economic Affairs and Energy.

More than one-third, or 33 percent, of all 5G patent declarations have come from Chinese companies. South Korea followed in second place with 27 percent, ahead of European companies with 16.9 percent and US companies with 14 percent.

Exactly how the patent competition will develop in the future, however, is still unclear, according to an industry source.

“The 5G (sector) is still newly emerging technology, and there are many years to come with more researches in the area,” an official from one major 5G equipment company said.