China’s race to enter mainstream tech is intensifying against not only the US but also its neighbor South Korea. With China aggressively pushing advancements of key technologies, Korea has been forced to take up the gauntlet before it is too late. The Korea Herald’s Tech Team has looked into four key areas to measure the technological gap between Korea and China and to offers forecasts about how the competition would develop. This is the second installment.

The technological race on the display panel front has to be looked at in two areas: the small and medium-sized panels for phones and the large panels for TVs and bigger devices.

For the former, Samsung Display leads the global race with its organic light-emitting diode panels and for the latter, LG Display stands unchallenged as the world’s only OLED TV panel maker with the capacity to mass-produce. 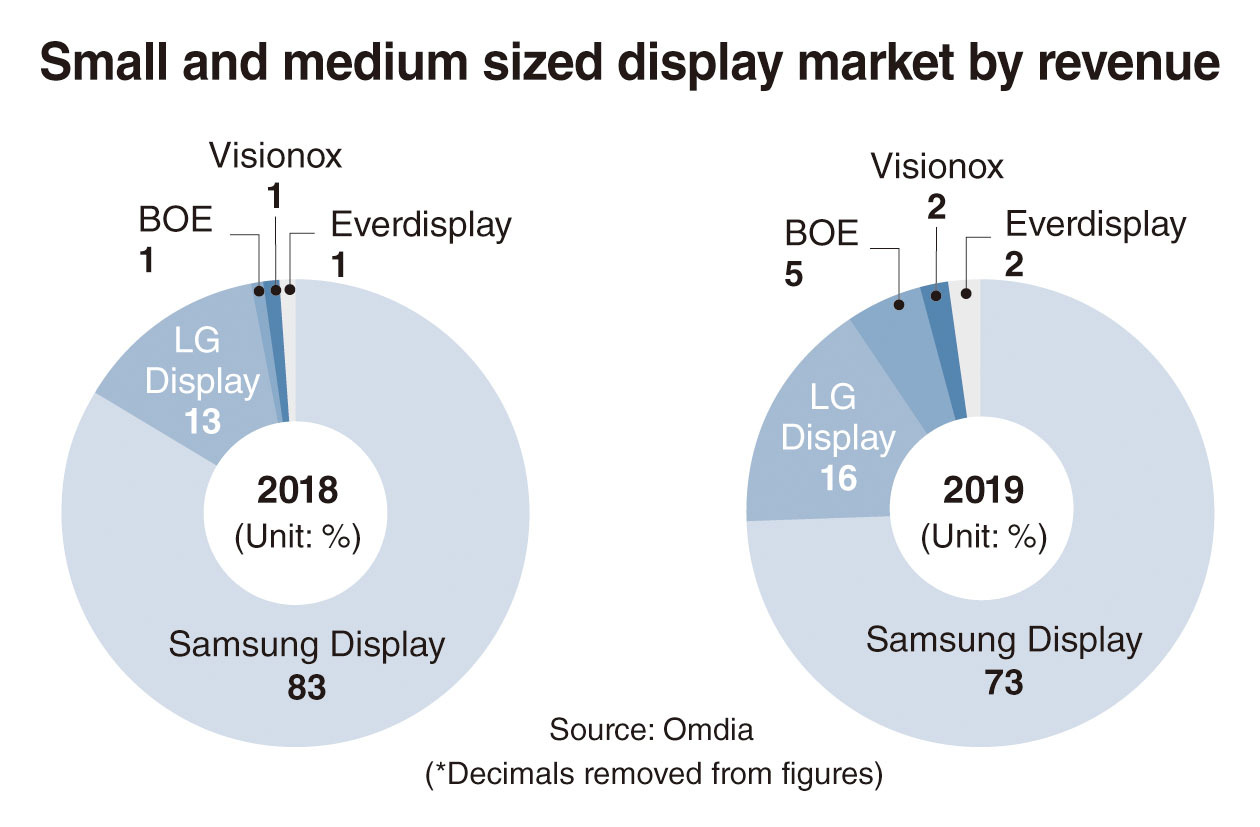 Chinese firms are catching up fast, backed with government subsidies for research and development.

But there’s demand the Chinese firms are just unable to fill.

“The thing about BOE and the other Chinese manufacturers is that they skipped the rigid OLED and went straight to invest in flexible OLEDs,” said a Samsung Display official.

“This is a tactic to selectively invest in more cutting-edge technology. Still, it also means that the Chinese suppliers are unable to provide for the demand for the conventional stiff screens that do not bend,” said the Samsung official.

But holding onto the crown is increasingly becoming a challenge.

“Chinese OLED suppliers’ products are evaluated to have lower quality but better price competitiveness. Many smartphone brands are co-developing with them, in order to avoid the risk of Samsung Display’s market domination,” said Jerry Kang, an Omdia analyst.

In April, BOE announced that it was developing a 3D sonic ultrasonic fingerprint sensor with Qualcomm, after which rumors broke that the Chinese display manufacturer could potentially be supplying panels for Apple’s upcoming iPhone 12. No confirmation has been made regarding the rumors.

“The inflection point in the small size OLED market will be when the Chinese OLED panels start going into iPhones, which is the emblem of mainstream, high-end and mass-order,” said Chung Yun-seong, also from Omdia.

The Chinese firms will first seek to overtake the Korean players in the small and medium-sized panels market before they tackle the market for large size panels, Chung predicted.

For larger panels, Chinese firms are still investing in liquid-crystal displays that need to turn profit before the manufacturers switch over to OLEDs, according to Chung.

Backed with unsparing financial support from the government, Chinese manufacturers are aggressively churning out LCD screens that are eroding profitability for Korean firms.

Turning away from meaningless competition, Samsung Display said it would desert its LCD lines altogether from first half of 2021. LG Display will also minimize their LCD lines by cutting the TV lines while keeping the computer monitors and screens for other electronics.

The firms will instead work on fine-tuning their next-generation technologies; for Samsung, quantum-dot panels and for LG, OLED panels.

“There are so many ways an OLED panel can evolve, such as going rollable and transparent,” said an LG Display official.

In order for Korean firms to keep Chinese competition at bay in large OLED panels, the most effective way would be to preemptively take intellectual properties, suggested Omdia’s Jerry Kang.

“The LCD business is relatively easy to catch up in, as the competitors only have to apply the same manufacturing process, but the OLED business is not as easy, as it depends more on experience rather than the process,” Kang said, emphasizing the need for Korean firms to develop exclusive technologies and build technical hurdles for latecomers.

In order to catch up with Korean OLED suppliers, Chinese suppliers are trying to hone cutting-edge OLED technologies such as low-temperature polycrystalline oxide panels, rollable or foldable screens and under-panel-cameras.

“But, due to the lack of experience of process know-how, it may not be easy for Chinese suppliers to overcome the high-end OLED products of Korean suppliers in the next two years,” said Kang.