Seoul officials have withdrawn their attention from the Japan-led process of reviving the Trans-Pacific Partnership since President Donald Trump pulled the US out of it to pursue his “America First” agenda shortly after taking office early last year.

An interministerial task force formed to consider Korea’s entry to the TPP was disbanded in July.

Finance Minister Kim Dong-yeon said Monday that Korea would decide whether to join the revived Pacific trade pact within the first half of the year after discussion among government agencies.

“We will closely monitor other countries’ moves as well,” said Kim, who doubles as deputy prime minister for economic affairs, in a meeting of economy-related ministers.

With the US in its fold, the TPP would have accounted for 37 percent of world gross domestic product and about one-quarter of its trade.

But the slimmed-down deal, known as the Comprehensive and Progressive Agreement for Trans-Pacific Partnership, is still regarded as a significant achievement toward bolstering free trade amid mounting protectionism prompted by the Trump administration.

Its signing ceremony was held in Santiago, Chile, just before Trump slapped steep tariffs on imported steel and aluminum in a move that many fear could escalate into a global trade war.

The 11 signatories form a market of 500 million, representing 13.5 percent and 15 percent of the global economy and trade, respectively.

The accord will come into force 60 days after it is ratified by six of them.

Trade Ministry officials here said the effectuation of the accord, which is expected to come in the first half of next year, would have a limited negative impact on Korea’s external commerce, given the country has concluded bilateral free trade deals with all of its members except for Japan and Mexico.

Seoul has refrained from making a formal decision on joining the Pacific trade pact since it first expressed “interests” in becoming a member in 2013.

Former US President Barack Obama’s administration pushed for the TPP as a strategic counterweight to China’s growing economic clout.

Korea put priority on concluding a bilateral free trade agreement with China, which took effect in December 2015. It has also engaged in talks on the Regional Comprehensive Economic Partnership initiated by China, which was excluded from the TPP.

He said entering a multilateral trade framework would make it easier for Korea to present a united front with other partners at a time when protectionist waves are rising.

Giving some sense of urgency to trade negotiators here is the growing possibility of the US rejoining the Pacific trade accord.

“TPP was a very bad deal for the US. There is a possibility we would be going in,” if better terms could be negotiated, Trump said at a news conference with Australian Prime Minister Malcolm Turnbull at the White House last month.

On the same day the two leaders met, a group of 25 US Republican senators sent Trump a letter encouraging him to “work aggressively to secure reforms that would allow the US to join the TPP.”

The existing members are poised to welcome the US re-entry, which would make the TPP the world’s largest trade bloc, surpassing the RCEP and North American Free Trade Agreement, which cover 31 percent and 28 percent of the global GDP, respectively.

Even without the presence of the US, Thailand is considering joining the slimmed-down version.

The US rejoining is likely to induce Indonesia, Taiwan and the Philippines to sign up to the deal.

The post-Brexit UK could also become a member.

“It is time for Korea to decide whether to join the TPP regardless of US moves,” said Chung Chul, a vice president at the Korea Institute for International Economic Policy.

The country would face the worst situation if the US discarded a bilateral free trade accord with Korea and rejoined the TPP.

The revamped deal leaves most provisions of the original pact intact, shelving those related to intellectual property and environmental protection inserted at the demand of US negotiators.

If it takes effect, tariffs on 99 percent of goods traded among its members would be eliminated.

The effectuation of the CPTPP would wipe out the benefits Korean companies have enjoyed in Canada and New Zealand, with which Japan has not concluded a bilateral free trade deal.

Furthermore, a higher level of trade liberalization under the accord could put Japanese firms in a more advantageous position than their Korean competitors in markets around the region.

One of the reasons for Korea to remain cautious on joining the Pacific trade pact seems to be concerns that Japanese products like cars and parts would expand shares of the domestic market.

They also worry that a diplomatic discord with Japan may hamper the process of Korea’s ultimate entry to the Pacific trade accord.

Tokyo suspended negotiations with Seoul on reopening a currency swap line last year, raising issue with the establishment of a statue embodying the sufferings of Korean women forced into sexual servitude for imperial Japanese troops near Japan’s diplomatic missions here. 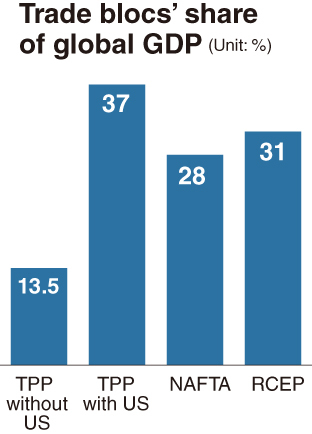