New Zealand is one of 12 countries that have joined what is expected to emerge as the world's largest free trade block. US President Barack Obama has been pushing to ratify the pact before the end of his term. South Korea has yet to decide whether to join.

Its actual implementation, however, faces uncertainty as key presidential candidates in the United States, one of the major countries leading the initiative, have expressed skepticism in the course of their campaigning.

"We hope that the TPP will pass before the conclusion of the Obama administration," Clare Fearnley, New Zealand's ambassador to South Korea, said during a discussion with journalists in central Seoul.

Mentioning that South Korea appears not interested in participating in the TPP, she said that all 12 member countries would "welcome" South Korea's decision if the country decides to join it. 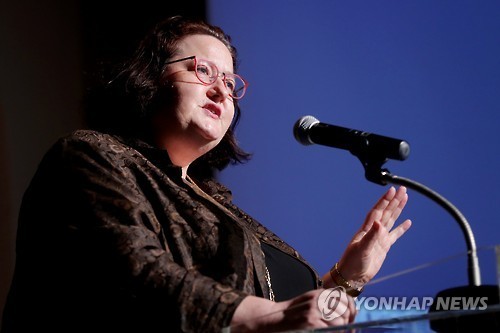 "We would hope that in the future Korea changes its mind about the TPP. From New Zealand's perspective, we think Korea is a very natural partner within the TPP," she noted.

As for the free trade deal that went into effect last year between New Zealand and South Korea, she said that it has been proved to be a "very successful" two-way agreement, and Korea, in particular, has done quite well.

"The trade between our two countries has grown significantly.

... I have to congratulate Korean negotiators because looking at the first year's statistics, Korea has done very well under the Korea-New Zealand FTA," she said.

Touching on the North Korea issue, the ambassador said that New Zealand is working actively with other U.N. member countries to implement the resolution adopted in March after Pyongyang's fourth nuclear test and also joined the global consensus to call for additional sanctions for its continued provocation.

"We work very constructively in New York with (South) Korean counterparts there. And we also understand the current focus is on sanctions and implementation," Fearnley said.

She, however, cautioned against the current "sanctions-only" approach to resolve the stalemate, saying that consensus is that such punishment should be carried out with efforts to bring Pyongyang to the negotiating table in the end.

"A great majority of diplomats that I deal with from a range of countries see sanctions and talks are part of a single process, while the focus now may be on the sanctions," she said. "And the objective of a great majority is to bring meaningful discussion in order to manage the situation and hopefully ameliorate the situation on the Korean Peninsula." (Yonhap)