By Korea Herald
Published : Sept 2, 2014 - 20:35       Updated : Sept 2, 2014 - 21:16
Kang Sok-ju, a seasoned North Korean diplomat, is likely to make a rare trip to Europe this week, officials at Seoul’s Foreign Ministry said Tuesday, in a move seen as in line with the North’s efforts to break from its international isolation.

Kang, secretary of the Central Committee of the Workers’ Party of Korea, is expected to make a tour of Germany, Belgium, Switzerland and Italy, starting later this week for about 10 days, to meet political figures in those countries, they added.

Given his status in North Korea, however, Kang’s visit to Europe takes on significance at a time when burgeoning signs of the North’s diplomatic contact with major countries are growing, experts said. 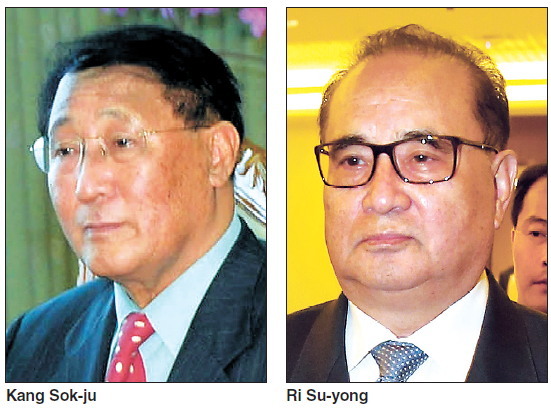 “South Korea is closely watching North Korea’s move as Pyongyang is seen as taking a somewhat offensive diplomacy,” said a high-ranking official at Seoul’s Foreign Ministry, asking not to be named.

He said that the move was a reflection of the North’s attempts to break away from its international isolation, as Pyongyang is under a set of sanctions imposed by the global community.

“But it would be difficult for North Korea to make its voice heard as the international community shares the need for zero tolerance toward Pyongyang’s nuclear ambitions,” he added.

Speculation is growing that North Korea and the United States may revive their contact channels amid reports that high-ranking officials from the U.S. made a secret visit to Pyongyang on an aircraft on Aug. 16 to discuss the issue of three detained American citizens.

Kang was involved in crafting the 1994 Agreed Framework between the U.S. and the North, under which Pyongyang promised to freeze its nuclear activities in return for light water reactors and oil as well as a gradual normalization of diplomatic ties.

Experts said it is too early to predict that the North’s relations with the U.S. will improve in the foreseeable future, given that Washington is not likely to change course on its policy on Pyongyang ahead of the mid-term elections in November.

The White House said Sunday that U.S. policy on North Korea remains unchanged, which is that Pyongyang must demonstrate its commitment to ending its nuclear ambitions through action if it hopes to reopen negotiations with Washington.

Kang may meet with high officials from Japan during his stay in Switzerland slated for late next week as a ranking official dealing with the Japanese abduction issue will be in Geneva for a seminar, government sources said.

In May, North Korea agreed to re-investigate the fate of Japanese people believed to have been abducted by the North’s agents in the 1970s and 80s.

In July, Pyongyang launched a special committee to investigate the case and in return, Japan lifted some of its unilateral sanctions imposed on North Korea.

Japan’s move has raised concerns of a negative impact on trilateral cooperation among Seoul, Washington and Tokyo on curbing the North’s nuclear weapons programs.

A Japanese government official recently reaffirmed Tokyo’s push for talks with Pyongyang, saying that North Korea’s continued missile and rocket launches will not affect the ongoing discussions on the abduction issue. He said that the next round of talks would open in early September.

The six-party talks aimed at curbing the North’s nuke ambitions have been dormant since late 2008 when Pyongyang walked away from the negotiating table. The talks involve the two Koreas, the U.S., China, Russia and Japan.

North Korea has called for an “unconditional” resumption of the talks, but Seoul and Washington insist that Pyongyang should first take concrete steps toward denuclearization. (Yonhap)