Seoul to expand sexual abuse prevention programs to all age groups, offer support programs to victims and their families

The Ministry of Gender Equality and Family plans to discuss the plan with experts from various fields on Feb. 22, the government-designated day for eradicating sexual violence against children.

Amid public outrage about sex crimes, the government and the parliament took measures last year to increase state support for victims and toughen punishment against offenders.

In addition, the government will provide extensive preventative education for children and adults designed to instruct people how to identify abuse, how to react and what to do afterward. The programs also would deter potential offenders by teaching people what acts constitute sexual crimes.

“Many offenders abuse minors and women on impulse. They don’t have a sense of guilt at the moment they commit the crime. By defining what sexual abuse is, potential offenders would have a chance to think and stop committing crime,” said Lee Myung-hwa, director of state-funded Sexuality Education and Counseling Center for Youth.

Preventive education will encourage victims to better cope with offenses. Many of them are afraid to report to law enforcement agencies and suffer from stigma and guilt.

Lee said that the problem is that society attaches a stigma to sex crime victims. Like robbery and traffic accidents, victims of sex crimes can always go back to normal life and get through it. But it is the reaction of people and the way they look at victims that makes it difficult to move on.

“I see many people expressing their rage against sex crime offenders. They want them to get the death penalty, but on the other hand, people’s strong reaction to sex crime cases show how much people are obsessed with the traditional virtue that forces women to keep their virginity,” Lee said.

Two tragic incidents shocked the nation last year leaving many feeling that no place is safe. In July, a primary school girl was raped and killed in Tongyeong, South Gyeongsang Province. Less than two months later, another 7-year-old girl was kidnapped during the night from her own house, and was brutally raped and strangled by a 20-something man in her neighborhood. She survived, but suffered severe injuries to her genitals and intestines, not to mention her mental health.

Public anxiety, however, pushed the government to beef up public security to prevent sex crimes, especially those against minors and women. The growing concerns also led the National Assembly to rewrite laws to allow law enforcement agencies to easily prosecute offenders. The statute of limitations on sex crimes against girls under 13 and handicapped women was abolished. Sex offenders who attack children can be indicted without the victim making an accusation.

The parliament also focused on the importance of preventing sex crimes against minors by expanding prevention education to all age groups across the country. Under the new law, education institutes, from day care centers to high schools, as well as government offices and other public agencies are obligated to provide educational programs on sexual abuse and sexual victimization, starting this year.

The law also urges the Gender Equality Ministry to develop preventive education programs tailored to all age groups and train lecturers to effectively instruct government officials of how to deal with sexual abuse and what to do in the aftermath of abuse. The programs will be expanded to the general public in the near future as the government establishes legal ground to implement the plan.

Along with institutional changes to protect children from sex crimes, communities and schools are stepping up efforts. Community members, for instance, in Ansan, Gyeonggi Province, and Goseong, South Gyeongsang Province, launched voluntary groups of guardians to protect minors on their way to school and at late hours in the evenings.

To increase awareness on safety and crimes, some schools encouraged students to investigate where safety zones are and what environmental factors would cause possible crimes nearby their schools.

The number of sex crimes against children aged 13 and under reported to the police have not shown significant changes in recent years. According to the National Police Agency, a total of 1,054 cases were reported in 2007, 1,007 in 2009 and 1,054 in 2011. The numbers have remained unchanged; however, there are a lot more cases unreported to the authorities out of fear of retaliation or others pointing fingers at their children, thus branding the kids victims for the rest of their lives. The government and experts say that less than 10 percent of the actual number of sex abuse cases involving children are being reported.

“Many victims’ parents think it is best for their children to keep the case in secret. They believe by keeping their mouth shut, they would protect the kids and reduce the stigma. But in fact, it would leave their children suffering from the pain and blaming themselves throughout their lifetime,” said Lee.

For child sexual abuse cases, victims must talk to their parents about it first, Lee said.

Many parents, after hearing the unexpected news, are often lost for words and blame their children, saying they shouldn’t have followed the offenders. But these are things parents shouldn’t do, she said.

“Parents should be very supportive and try to comfort their children first. And they should also tell the kids in advance that they shouldn’t lie if they encounter such an experience,” she said.

This is why it is important to educate parents because they don’t know what to do next.

“Parents should report the case, let the authorities punish the offender, and let their kids get through it and move on,” said Lee.

At home, experts recommend families establish a time to talk about children’s daily lives, such as who they met and what they did during the day. Children should be accompanied by their parents or guardians on their way to school and otherwise instructed to take main streets and walk with their friends. Children should say no to strangers whenever they offer presents, food or ask for help.

They also need to freely talk about touching and tell their parents if someone approaches them and makes them uncomfortable by touching sensitive areas. List guidelines and memorize the location of police patrol centers nearby in advance so that children can ask for help if an emergency happens. Community members, other than parents, should look after children in their neighborhood and offer helping hands whenever they find children in trouble.

Recent data shows that more than 40 percent of sex crimes against children occurred in residential areas and mostly during the daytime, suggesting that help or even a little attention from community members to children will play a big role in preventing sex crimes. 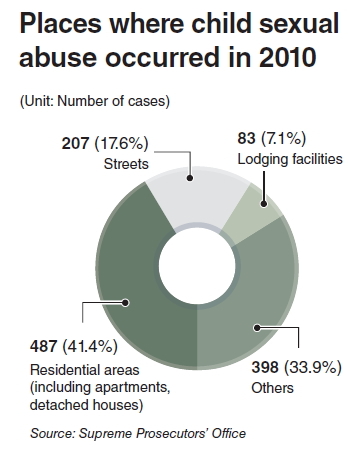 Unlike in the past, various support programs and measures are available not only to the victims but also for families.

The government currently operates 30 integrated support centers around the country that offer one-stop services to victims and their families. The centers offer a wide range of services including counseling, medical and legal support to victims in cooperation with regional medical centers and legal service institutes. The centers also help victims report cases and make investigation requests to the police, as well as support them in finding safe places and institutes for rehabilitation in the aftermath of abuse. Victims can request help by dialing 1899-3075 wherever they are. For minors and the disabled, the government operates Sunflower Children’s Centers that offer long-term psychiatric treatment. There are 15 Sunflower centers across the country and they provide constant medical care in service of medical staff and professional therapists, officials at the ministry said. 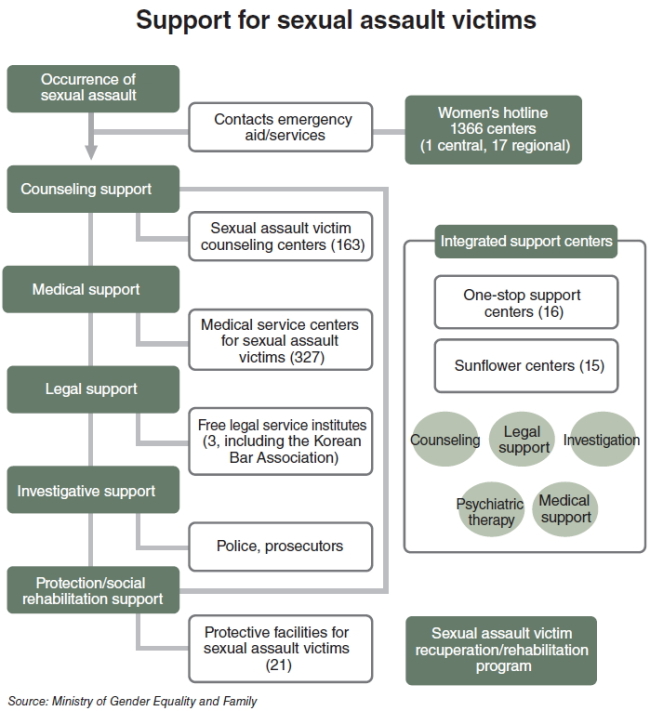 As of Oct. 25 last year, the government lifted a ceiling on medical expenses for all sexual abuse victims. The measure also allows all family members regardless of the age of victims to get psychiatric treatment for free. Previously, the government covered only 5 million won of medical expenses for abuse victims and psychiatric consulting fees only for families with victims aged 19 and under.

Sexually abused children feel extremely insecure as they have lost trust in people. So it is important to help them feel secure by keeping offenders away from the victims and relax their parents, said Chung Un-sun, assistant professor at Gyeongbuk University Hospital.

“Children interpret the severity of the case by observing their parents’ reaction. If parents say the abuse has ruined their kids’ lives, they would think the same and would never get out of it,” Chung said.

Chung stressed that the government and society should pay attention to incest.

There are many children constantly abused by their parents, mostly by their fathers, but won’t speak about it because their mothers are also being abused and not strong enough to confront their husbands’ violence.

“A lot of children modify their testimony in fear of their parents, and this makes it impossible to save their lives. The government has to limit the custody of the child from abusive parents,” Chung said.