Hyundai men face off in Dongjak

This is the second in a series introducing the key inter-party battle fields in the upcoming April 11 general elections. ― Ed.


Dongjak, southwestern Seoul, is a swing voter district where the right and left wing have fought closely in recent elections.

It is also classified as a gray zone, as it is located between the old Gangbuk area and the relatively developed Gangnam.

Both main parties’ parliamentary candidates there have had careers in Hyundai conglomerates. 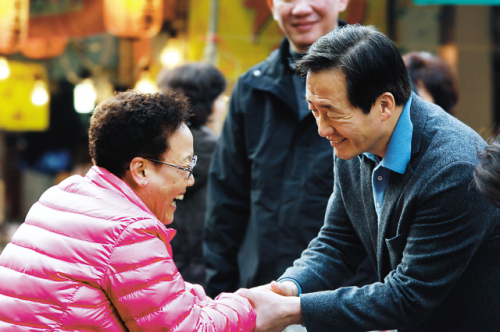 The six-term lawmaker is regarded as having the upper hand over his opposition rival, largely thanks to his long-time standing as a potential presidential candidate.

“Dongjak, despite its geographic and social advantages, has long been neglected in terms of development,” Chung said.

The son of the group founder thus pledged to establish the necessary infrastructure, including office buildings of large firms, and also devoted his private property to launch an urban development research institute for the area.

Chung, despite his high profile and stable poll results, needs first to overcome the public’s negative views of his party in order to win.

Many local residents seem to recognize him as a man of potential who is qualified for the post, but are reluctant to vote for the Saenuri camp.

The party has recently been hit by internal feuds over candidate nomination and Chung was outspoken in blaming the party leadership for the debacle.

Should he win in next month’s race, the senor lawmaker is scheduled to face an internal race against party leader Rep. Park Geun-hye for candidacy in the December presidential election.

On the side of the opposition Democratic United Party, another Hyundai man has hit the campaign trail against his former colleague and boss.

Lee Kye-ahn, who represented the area in the last parliamentary term, was Chung’s classmate in Seoul National University and entered Hyundai Heavy Industries in the same year in 1975.

“Rep. Chung was born with a silver spoon in his mouth but I am the right one to really serve the people and work for their interest,” Lee said.

“I am fighting a hard game against him but many residents have recognized my accomplishments of the last term, and offered to support the left-wing camp in this election.”

He also criticized his right-wing candidate for achieving little for his constituency over the past four years, though he had influence in the party as its leader and also a close presidential aide.

The DUP candidate, however, has been left to form a union with minority New Progressive Party candidate Kim Jong-chul to catch up with Chung in polls.