This is the second of the series introducing cultural centers of different countries in Seoul. ― Ed.


With Korean cultural centers slowly expanding their presence in countries around the world, the Goethe Institut in Seoul says it is important to respect artists’ creativity, rather than using their production as means of building the nation’s image.

The Goethe Institut has been working with both Korean and German artists to share understanding of their cultures and create new productions that blend the two effectively.

There have been a series of cultural exchanges, such as bringing German artists to Korea, letting them experience the culture and helping them create a new production in collaboration with their Korean counterparts.

“Cultural cooperation should have a number of formats which are about learning, exchanging and mirroring oneself. Inviting foreign artists is also important because they go back and tell people (about Korean culture),” he said.

In the latest work, the Goethe Institut plans to present a competition for Asia’s promising composers at Tongyeong International Music Festival next year, as a part of its effort to support their talents in contemporary music.

The center, currently in talks with festival organizers, will ask five or six artists in Asia to compose contemporary pieces of music and play them during the festival organized in memory of the great Korean composer Yun I-sang in Tongyeong, South Gyeongsang Province. Tongyeong is the birthplace for the late Yun, who bridged western and eastern culture through his modern contemporary works.
“We hope to help Tongyeong Festival to become an incubator, a hot bed for compositions from Asia,” explained Reimar Volker, head of cultural projects at the center.

There has been a growing interest observed in German arts, particularly in theater works in recent years. Last year, German artists participated in Korean works or staged German productions on opening programs for all three major performing arts festivals in Seoul. And the presence of German arts is likely to continue this year, Dreyer said.

Rene Pollesch, a top German dramatist, will perform at Festival Bo:m with his production titled “Here’s Looking at You, Social Context of Delusion!” At the festival to be held at theaters centering Daehangno in Seoul next month, another experimental German theater group She She Pop will explore intensely personal relationship between fathers and their children with its production “Testament.”

Targeting younger audience, an electric-acoustic pop group will perform at Hongdae in Seoul in invitation of the Goethe Institut.

The center will continue to open its window to North Korea, seeking more vibrant cultural cooperation with the communist regime. The center was the first foreign cultural institute that opened a reading room in Pyongyang from 2004 to 2009.

“There was a certain agreement with North Korea that it will be free access and no censorship. For reasons relating to these contracts we had to close (the reading room). There was a feeling that this could not be guaranteed,” Dreyer said.

Even though it lost its physical presence in Pyongyang, the center has been continuing supporting North Koreans in areas of films, books and language educations.

“We are inviting a group of North Koreans, librarians translators, journalists, film specialists in Berlin. We are also working in a musical encounter, exchange with North Korea by inviting musical students from music schools,” Dreyer said.

In South Korea, the center also plans to promote the German language in response to the growing demand.

“Classes are full and we are even using hall for classes because there is a huge demand,” Dreyer said. The center in Seoul alone had 3,700 enrollments last year and will open new classes in Daegu. The center currently operates classes for German language in Seoul and Daejeon. The Seoul center is also renovating its building on Mount. Nam, center of Seoul, to offer convenience for Koreans wishing to learn about Germany and German culture.

“It is the first major renovation in 30 years. We are renovating inside mostly while keeping the building as it is. The center is temporarily on the 5th floor of annex building of Seoul Square, formerly Daewoo Building, in front of Seoul Station. 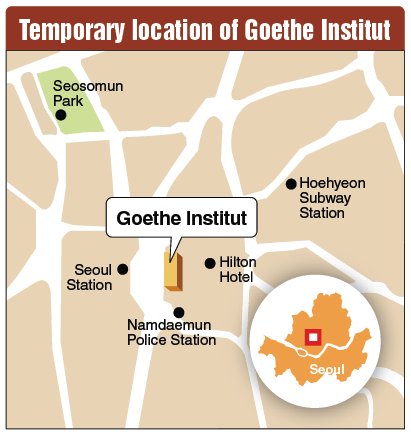