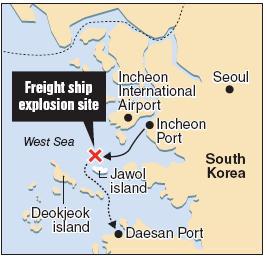 The explosion of the 4,191-ton vessel Doola No. 3 took place in waters five kilometers north of Jawol Island near Incheon around at 8:05 a.m., the Coast Guard said. Five people aboard the ship were rescued.

A total of 11 Korean and five Myanmarese crewmen were aboard the ship, the Coast Guard said.

Doola Shipping, which operates the ship, said the explosion seems to have taken place while gas was being drained from the oil tank. “The vessel usually transports diesel, but this time it carried gasoline. We are now examining whether it had any relation to the explosion,” a company official said.

After departing from Incheon port, the ship headed toward Daesan port in South Chungcheong Province. Before the departure, the ship unloaded 6,500 tons of gasoline at Incheon.

The Coast Guard said they dispatched a batch of patrol and rescue ships to search for the missing crew. (Yonhap News)