[VOICE] Should the National Security Law be abolished?

The National Security Law has divided Korean public opinion since its introduction in 1948. To its proponents, more often on the conservative side of politics, the law is a necessary safeguard against North Korea and communist subversion of the state. To its critics, generally on the political left, it is used a tool to stifle criticism of the government and economic status quo. Most recently, the NSL has been in the media spotlight because of the reaction of a small number of South Koreans to Kim Jong-il’s death.

The government warned that those who traveled to the North to pay their respects to the former North Korean leader or set up shrines to his memory would run afoul of the law. An attempt by the then-Uri party to repeal the law in 2004 failed due to opposition by the Grand National Party, and no such attempt has been made at the National Assembly since then. Public opinion on the NSL varies, but one poll from 2004 showed that 57 percent wanted to retain or revise the law, while 33 percent wanted it abolished. 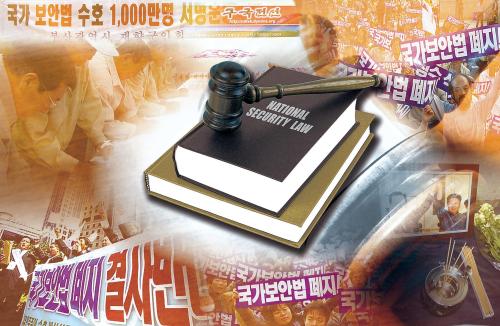 The law has been long abused

The simple act of re-tweeting the message “long live Kim Jong-il” from North Korea’s official Twitter account was enough for authorities to deem a socialist party member identified by his surname Park a threat to national security and for them to begin an investigation against him.

Park is a member of a party which has been known to criticize North Korea, but the ludicrous case against him is not an isolated one. For too long, South Korean authorities have been using the National Security Law to restrict basic freedoms and gag civil society in the name of national security. The NSL should be reformed in line with human rights law, and if the government cannot do this, it must be abolished.

When South Korea was under military rule, people were regularly imprisoned under the NSL. At that time, torture, forced confessions and unfair trials were commonplace within the criminal justice system.

Military rule may be a thing of the past but the NSL continues to be used by authorities, especially the police, the prosecution and the National Intelligence Service, to suppress dissent, in particular critics of the government’s policy toward North Korea.

International human rights law allows government’s to restrict freedom of expression and association if there are legitimate concerns for national security ― but, crucially, these restrictions cannot include peaceful expression of criticism or dissent.

In violation of international law, authorities are using the NSL not to address threats to national security but instead to intimidate people and curtail their right to freedom of expression.

The NSL uses vague, broad language to define criminal acts. The term “anti-government organization” in Article 2 is defined as including those who “aim at a rebellion against the state” ― which could mean anything. That is, you could be punished not just for joining an “organization” but also for attempting to join one.

The NSL is having a chilling effect on freedom of expression and association in South Korea ― even small, harmless actions are leading to intimidation and harassment of government critics.

In the past three years, numerous arrests have been made under Article 7 of the NSL for “propagating or instigating a rebellion against the state,” under which an individual found guilty of praising, inciting or propagating the activities of an “anti-government organization” could face up to seven years in prison. The criteria that would define “praise,” “incite” or “propagate” are open to interpretation.

As an example, earlier this year on March 18, 2011, two members of the Capitalism Research Society, including its president, were arrested on suspicion of violating the NSL.

On the March 21 both men were released without charge, but police raided the homes of 12 other members of the CRS. During the raid police confiscated software containing documents discussing alternative economic systems. The police considered “guidelines” adopted by the CRS as “beneficial to the enemy (North Korea).” Choi has since been charged under Article 7 for posting these “pro-enemy” materials on the Internet.

There are a number of investigations currently under way against those who have posted materials related to North Korea, where authorities have deemed the materials to be “enemy benefiting.”

Another case, that of People’s Solidarity for Participatory Democracy, illustrates that the NSL has even been used against those whose activities indicate a negligible alignment to North Korea at best.

On June 11, 2010, the NGO transmitted an open letter and report to the U.N. Security Council, which questioned the results of the Joint Civilian-Military Investigation Group’s inquiry into the sinking of the South Korean naval ship Cheonan.

In its letter, the PSPD urged the governments of both South and North Korea to refrain from any provocative action which would threaten the peace on the Korean Peninsula.

On June 16, 2010, the Seoul Central District Prosecutor’s Office initiated investigations against the PSPD for charges of violating Article 7 of the NSL, or “enemy benefiting.”

Cases involving NSL charges are not always straightforward and can take years to resolve. During this time, organizations may be forced to close or individuals silenced, regardless of the actual outcome of an investigation, trial or appeal.

Until just recently there was a welcome decline in the use of the NSL to silence critics. But since 2008, investigations, arrests and prosecutions of individuals and organizations have been on the increase.

South Korea may have serious security concerns with regard to North Korea, especially in light of recent developments, but such concerns should not be an excuse for legislation that restricts peaceful dissent and political opposition.

The only way to prevent misuse of this abusive and long-abused law is to abolish it or drastically revise it to bring it into line with international human rights law and standards.
By Sam Zarifi

Sam Zarifi is the Asia-Pacific director of Amnesty International. ― Ed.

The NSL protects our freedoms

The persistent arguments between patriotic Koreans and pro-North Koreans regarding the abolishment of the National Security Law (enacted on Dec. 1, 1948, at the time of the foundation of Korea) is one that will not cease until the North Korean regime, which seeks to subvert South Korea, falls.

North Korea and pro-North factions in the South will continue to campaign for the abolishment of the law under the guise of “human rights protection.”

The NSL should not be abolished for the following reasons. First, the law works to prevent North Korea’s seditious plans from being successful. Ever since its inception, North Korea has steadfastly pursued its primary objective of subverting South Korea. The Statute of the North Korean Labor Party stipulates, “the impending mission of the Party lies in achieving national liberation and People’s Democracy throughout the nation by capturing ultimate victory of socialism in the North, and the ultimate mission is to construct a communist society by indoctrinating the whole society in the name of ‘Juche Ideology.’”

North Korea is continuing its struggle to achieve these core objectives. Furthermore, the NSL safeguards the South Korean government and applies only to spies and pro-North factions. In this manner, it is similar to the “Communist Control Law” in the U.S. There is no country in the world which does not possess a law to protect its respective government and no country has abolished such a law in the face of abolishment movements initiated by hostile regimes and their followers.

The effective means of snuffing out such a culture is the NSL. The law stipulates that when “an anti-national organization equipped with a command and control system knowingly engages in acts that threaten the existence and safety of the nation and destabilize its democratic order,” it is subject to punishment.

Third, the NSL protects human rights as it safeguards the fundamental values that South Korea strives for. According to Article 1 of the NSL, the purpose of its initiation is to “regulate acts that threaten national security, in order to safeguard the safety of the nation and the freedom of its people.”

The denial and elimination of ideologies that threaten and harm the core values of the nation are the basic responsibility of the government that seeks to protect the human rights of its people. Thus, the NSL was created to fulfill this responsibility.

So far, most of the people who have been convicted of transgressing the NSL were either communist fanatics seeking violent class revolution or sympathizers refusing to obey democratic law and order. The law does not oppress domestic political factions. On the contrary, it seeks to identify and punish communist fanatics from perpetrating the most heinous crimes against humanity including violent class revolution. The crime of laudation and incitement under Article 7 is the only legal grounds upon which North Korea’s united strategic tactics could be nullified.

Fourth, the National Security Law has been amended seven times to eliminate all potential violations of human rights. The newly included declaratory statement stipulates that “the fundamental human rights of the people must be protected.” Those leading the abolishment movements are citing that the violation of human rights is the chief reason to abolish the NSL. However, their real objective is abolition itself. They will continue to cite human rights until the law is completely abolished.

Lastly, the laws North Korea has with a view to maintaining its regime are incredibly brutal and inhumane. Pro-North factions are hypocritical in the sense that they remain silent about this issue while fighting for the abolition of the South Korean NSL. The most brutal law that sustains the North Korean regime is the “Criminal Law.” It metes out atrocious punishments including capital punishment and confiscation to citizens who disobey the government in the name of “anti-social crimes” to sustain its regime.

Pro-North factions in South Korea fighting for the abolition of the NSL without criticizing North Korea’s brutal laws are simply calling for the disarmament of South Korea.
By Song Dae-sung

Song Dae-sung is president of the Sejong Institute in Seoul. ― Ed.