Attractive, assertive and financially secure, Park Min-kyoung seems like the kind of woman many men would want for a wife. But marriage isn’t a priority for the 41-year-old singleton. She is single by choice and has no plans to get married any time soon.

“If I can find someone who really loves me, I can. If not, I don’t need to get married. I don’t want to get married for money or because I’m lonely,” she said.

Park is not alone she is just one of an increasing number of South Korean women who are shunning marriage in favor of their career and the single life. 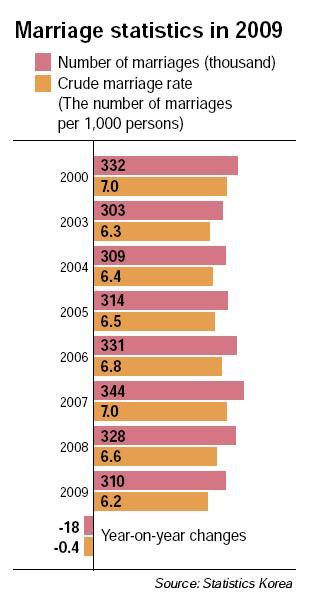 Although both sexes are getting married in fewer numbers, it is women especially who have an unfavorable view of the institution. According to recent stats, just six out of 10 women believe marriage is a must, compared with eight out of 10 men.

In a statement after the release of the data, Statistics Korea put the decline in marriages down to the economy, saying, “With the adverse economic conditions, more people are postponing marriage or cannot afford to marry.”

Park agrees that financial barriers are a problem, citing the high cost of rent and mortgages in particular. But, for her, the reasons for avoiding marriage go much deeper, and are cultural as much as economic. She says that many Korean men don’t see women as being equal.

“Korean men are so dominating. They don’t know how to treat women. And in Korea many things are really different from other countries,” she said.

“Because of gender division of labor and inequality in the patriarchal family, many Korean young women feel marriage is unfavorable to women,” she said.

Park also points the finger at the huge influence extended family has here. According to her, a man’s extended family can sometimes be the driving force behind a union rather than genuine love.

Lee So-ra, a 24-year-old college graduate, is another woman who thinks traditional Korean cultural norms are turning women off marriage. She says that it is the woman who is usually expected to make all the sacrifices in a marriage.

“I would have to sacrifice everything if I’m married. First of all, I cannot get my career. I would have to take care of his family and him and his child. So here it is quite hard if I give birth to a baby because I would have to care for the baby and I would have to do my job. If I come home, my future husband would just be lying down on the sofa, I guess, because that’s what my father did.”

Unsurprisingly, Korea’s declining marriage rate has corresponded with a large drop in births in recent years. Korea’s fertility rate the average number of children born to a woman over her lifetime is one of the lowest in the world at 1.15. As a result, the nation’s population is aging rapidly, spelling major problems ahead for pensions and the welfare system. 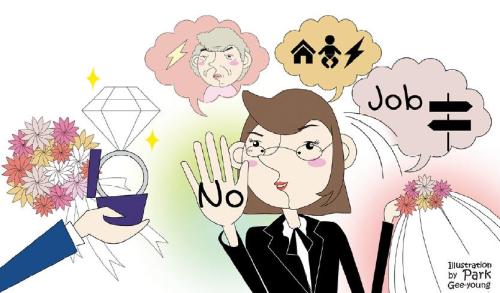 As in the case of marriage, both economic and cultural factors have contributed to the decline in births. Korean households spend almost three times more money on education as a percentage of income than in the U.S., making the cost of raising a child prohibitively expensive for many.

Inflexible work practices further discourage child rearing. Although it is illegal to fire an employee for getting pregnant, Lee So-ra says that, in smaller companies in particular, it is still a risk for women.

“If I go to a small company and I get pregnant; if I take a rest from my work, maybe they will take away my desk,” she said.

Despite big increases in government spending in recent years, both Park and Lee think that Korea’s child care facilities aren’t up to scratch.

“The system for taking care of children is not good,” said Lee. “The kindergartens are full. There are child care systems in companies in Western countries, but here no; except in major companies.”

Professor Lee Jae-kyung agrees: “Because neither government nor corporations offer proper policy options for working women with children, it’s difficult for women to have a career and ... family obligations without conflict.”

Currently, female employees who give birth are entitled to three months paid maternity leave two months at their full rate of salary, with the last month capped at 1.35 million won.

In a statement, the Ministry of Gender Equality and Family said that, as part of its work toward a “corporate family-friendly environment and gender equal society,” it promoted “flexible working hours and family-friendly corporations.”

In a bid to raise the birth rate, the government recently announced a five-year plan focusing on improved maternity leave for working mothers. Under the plan, female workers with children aged under six will be able to take leave additional to the standard 3-month period for up to one year and receive 40 percent of their monthly salary or between 500,000 won and 1 million won ($442- $884). Currently, the subsidies are set at 500,000 won regardless of income.

But whether the proposals will make a significant impact on births remains to be seen. Over past five years the government has already nearly tripled its child care budget seemingly to little avail.

For now, both Lee and Park say that if they walk down the aisle, it will be to a foreigner. Park has dated many western men and argues they are less controlling than some of their Korean counterparts.

“Western men learn from their parents to treat women well,” she said.

Although Lee currently has a Korean boyfriend whom she is very happy with, when it comes to her career and marriage, she is determined to work and marry in the U.S.

“The first time when I said my thinking, my father was angry but my mother was, ‘Ok, whatever you want to do,’” she said.

But Lee isn’t all negative when it comes to Korean men. She believes things are changing for the better.

“With my father, I didn’t see him give flowers or presents for my mom’s birthday or wedding anniversary. But my boyfriend ... would give something to me to make me happy.”

For 24-year-old Nam Da-hyun the problem isn’t that there are no nice men but that they have to be found while a woman is still very young.

“We just have to find the right guy when we are young, because if we wait to find the one in our late twenties, it’s too late, the right guys are all gone, married to younger women. That is why many say ‘once you miss the right age for marriage, you never know whether you will even get to marry or not.’”

This is the first in a two-part series on the declining marriage rate in Korea. The second part appears tomorrow. ­ Ed.