By Korea Herald
Published : Apr 5, 2017 - 14:11       Updated : May 8, 2017 - 11:32
The Korea Herald is publishing a series of articles on major contenders in the forthcoming May 9 presidential election, using a SWOT analysis to present their strengths, weaknesses, opportunities and threats. Below is the third installment, on Hong Joon-pyo of the conservative Liberty Korea Party. -- Ed.

Former star prosecutor and political firebrand. These are the two key characteristics that define Hong Joon-pyo, governor of South Gyeongsang Province and presidential candidate for the conservative Liberty Korea Party.

Hong became the most unexpected player in this year’s earlier-than-planned presidential election, suddenly emerging as the only plausible candidate for the conservative party, which has reeled under the consequences of embattled President Park Geun-hye’s ouster.

His reputation in the political arena tends to run to extremes, mostly due to his frequently controversial way of speaking. But in the absence of other competitive candidates, the hard-line conservative camp chose to bet on his conspicuous personal character in an effort to jolt the drift of the progressive-leaning presidential race. 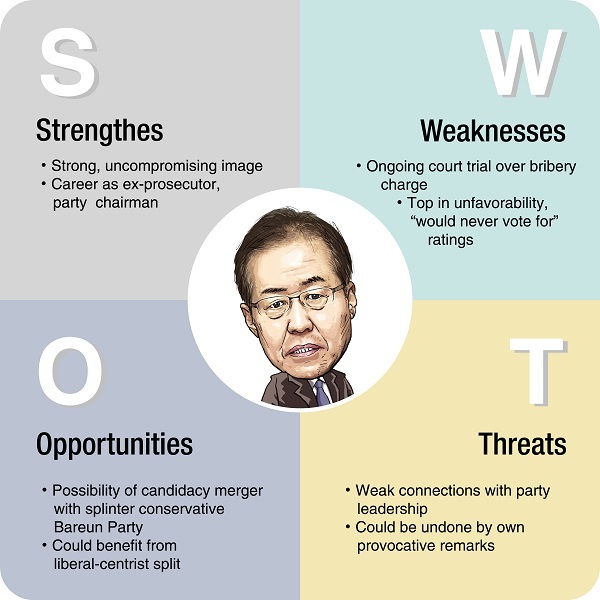 Hong’s greatest strength is his tenacious and uncompromising image, which connects him to his past career as a successful senior prosecutor as well as his ranking role within the conservative political arena.

Though often triggering backlash from dissenters, his direct manner of speech and frequent use of strong terms has also tended to intensify a sense of unity among stronghold groups.

The governor’s words may be rough, but his policies and vision have always been crystal clear and easy to understand, according to supporters.

Having been out of partisan politics the past few years -- although mainly due to legal wrangling over bribery allegations -- Hong was saved from damage in the conservative debacle that followed President Park’s scandal and fall from power.

Hong’s greatest strength is his most vulnerable point. His disputed remarks and carefree actions have driven voters, even some who consider themselves conservative, away to centrist alternatives such as Rep. Ahn Cheol-soo of the People’s Party.

His increasingly aggressive comments against the liberal camp and high unfavorability have also won him the nickname “Hong-Trump,” in reference to outspoken US President Donald Trump.

The ongoing court trial on his bribery allegations is another obstacle for the presidential aspirant. Though he was acquitted at the high court last month, Hong still faces a final decision from the Supreme Court, upon which his governorship and presidential candidacy will depend.

“I shall consider committing suicide, should I be ruled guilty (of bribery charges),” Hong has said, in another example of controversial speech.

As a conservative political celebrity who has not been closely associated with ousted President Park and her cluster, Hong is a rare figure within the embattled Liberty Korea Party who may possibly join forces with the splinter Bareun Party and its candidate Rep. Yoo Seong-min.

As both Hong and Yoo have stalled in polls with single-digit support, it has been deemed crucial for the groups to reunite ahead of the imminent May 9 presidential election.

Rep. Yoo, who titles himself a reformist and rational conservative, has so far reserved comment on candidate unification, though he has alluded to the possibility, either with his home conservative party or centrist figures.

Assuming conservative unity, the ongoing rivalry between liberal Moon Jae-in and centrist Ahn Cheol-soo could deliver the conservative standard-bearer an opportunity to stand almost equal to the two front-runners.

“If four camps, each representing the progressives, liberals, centrists and conservatives face off in an election, conservatives prevail. That is the picture I have for this election, too,” Hong said.

That Hong is not an insider in the pro-Park faction also means he has relatively weak ties with the conservative party’s leadership and key figures.

Though he served as a lawmaker in the party for four terms and party chairman, Hong has been away from the party’s central headquarters in recent years as he has served as a provincial governor.

Observers also suggest his disputed comments, especially those in the form of slander against rivals, may boomerang on him and further cut down his already low support rating.