A man throws a woman in the open air and catches her with one hand. Then she carefully balances herself upside down with one hand holding his other hand.

Getting a sneak peek into the performance “Enva” by Spanish artist group Amer i Africa Circ Cia, the hand-to-hand circus is sure to provoke “oohs” and “ahhs” from the audience with their compelling acrobatics.

With music adding a mischievous mood to the act, the pair perform awe-inspiring acrobatics between 250 kilograms’ worth of straw tied up in bales strewn around the open stage.

“Enva” is one of the eight performances to be held this weekend and the next as part of Circus Caravan’s fall season program, at the Oil Tank Culture Park in Mapo-gu, Seoul.

“The most important thing on stage is to breathe together and to be connected to each other and to the audience,” said Africa Llorens in an interview with The Korea Herald. Llorens has been working the troupe for nine years. Raimon Mato joined the company two years ago.

The show includes a few moments where the audience is invited to participate while the pair perform.

In another show, “Breathe,” by Creative Group A Person;s, the performer climbs a 30-meter rope attached to a 50-meter crane. Climbing barefoot, the artist brings the audience along on his tough journey.

“The rope may be a medium to lift the performer but at the same time, it is the cause of pain. When the rope is wrapped around the body, it also gives support and protection from falling,” a performer from Creative Group A Person;s said. “This can be an ambivalent action, which I think, resembles our lives.” 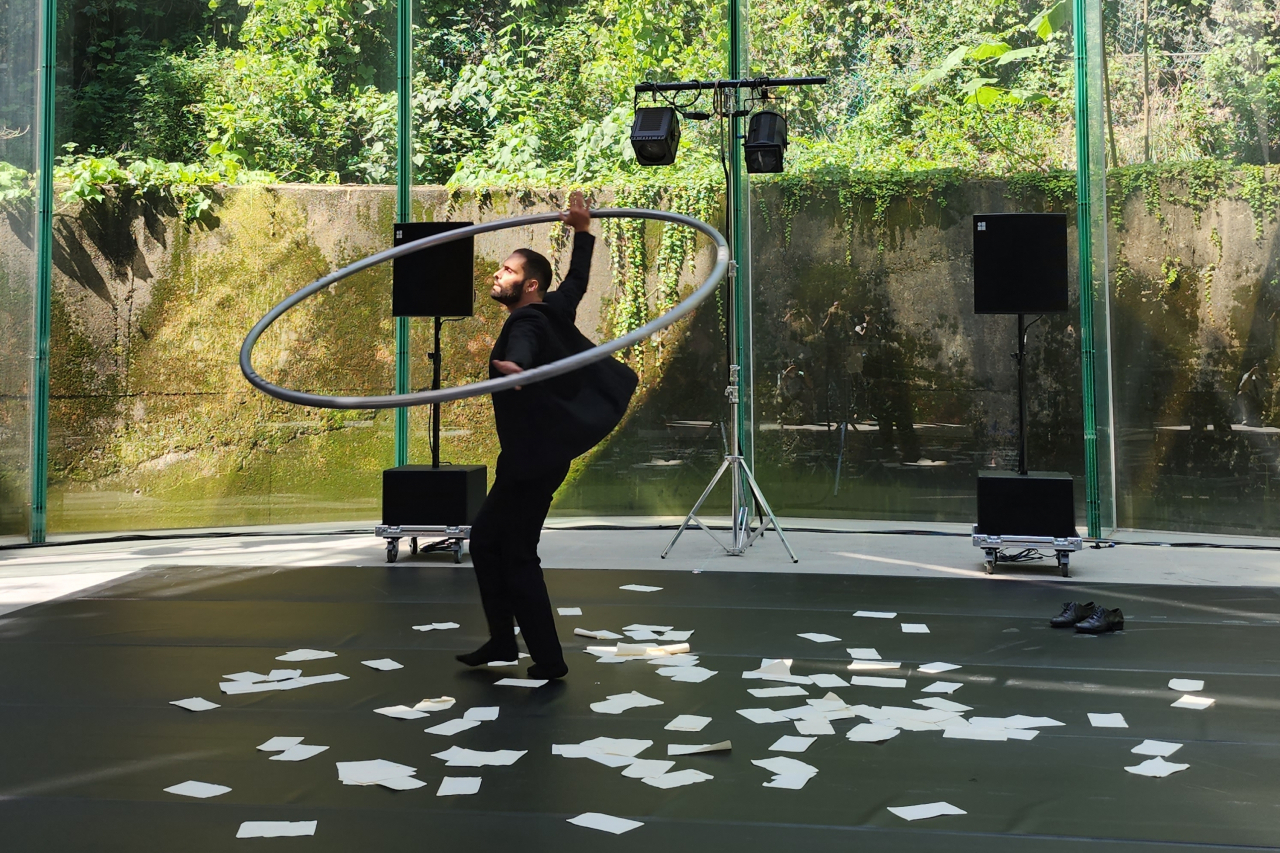 Juan Ignacio Tula, a circus artist and dancer from an independent company in Lyon, France, explores the artistry of spinning the Cyr wheel.

Inspired by the whirling dance of dervishes, “Instante” consists of repetitive rotations and movements blurring the notions of space and time for both the performer and the audience.

While spinning in the Cyr wheel, which weighs about 13 kilograms, Tula performs different routines and choreography to keep viewers mesmerized.

“The performance is very demanding … I have to concentrate a lot before the show to prepare my body, physically and mentally,” the artist said in a written interview. “(But) the feeling of turning is very pleasant to experience.”

The Seoul Foundation for Arts and Culture offers the program table on its official website.

The fall season program includes “3D” by Cie H.M.G., exploring the interaction between the body and sound through a choreographic circus; Le Gros Orteil’s “The Liberian,” featuring acrobatics, juggling, breakdance and beatboxing; the aerial show “Guide to Urban Birds” by Cont-Conn delivering a story of birds living in the city; a story of circus fairies “Happy Happening” by Space Circus Salon with aerial silk; and “Wish” by Code Sassy, which combines a traditional Korean shamanistic ritual known as “gut” with a Cyr wheel and violin playing.