Female construction workers face discrimination despite a surge in number

By Lee Yoon-Seo
Published : May 13, 2022 - 13:59       Updated : May 13, 2022 - 15:08
The female workforce is increasing, even in once male-dominated industries. But South Korea’s construction industry is failing to provide an adequate working environment for them, as sexual harassment and a lack of safety equipment for women go unaddressed.

“Nowadays, workers frequently use machines to carry the load, so there’s not as much need for male workforce as before,” said Kim Kyung-hee, a senior researcher at the Korean Women’s Development. “Moreover, the construction materials have become lighter, which further lowered the entry barrier to the industry.”

“Because there aren’t a lot of available migrant workers in the country currently due to the pandemic, more and more construction sites are hiring female workforce to fill in for their stead,” said Kim.

However, the industry does not seem ready to take on so many female workers. 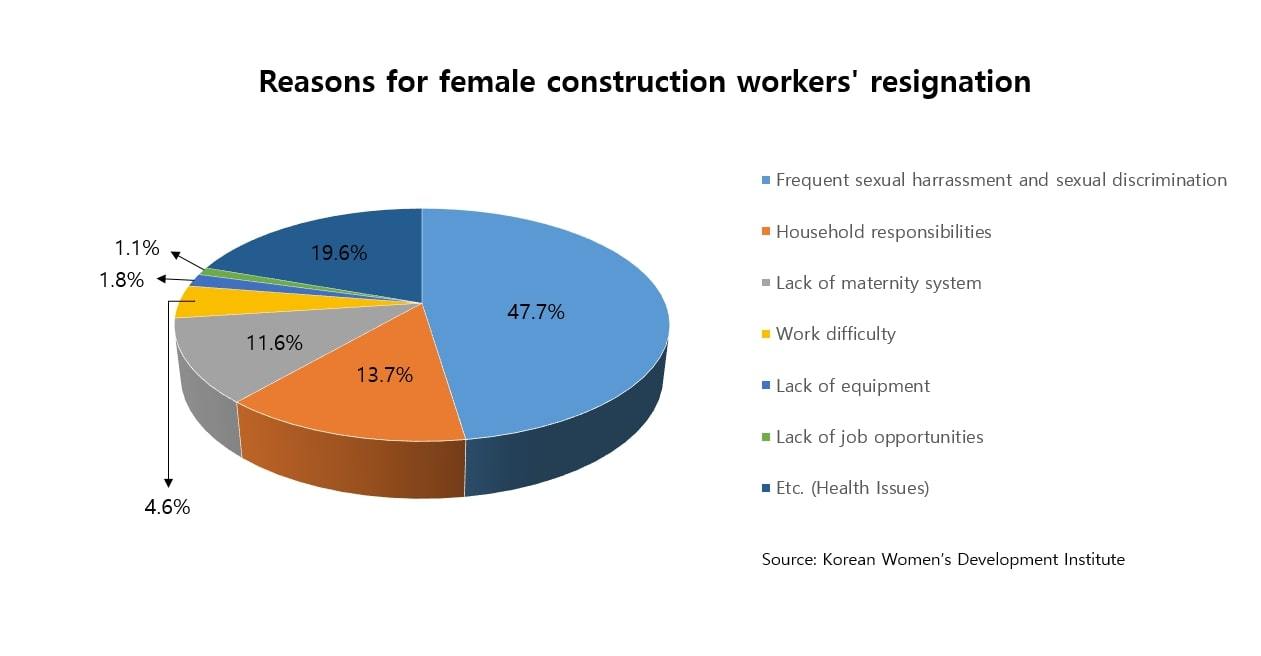 Lee, who is a part of construction union at Seoul, said that “the men we work with, who are largely middle-aged, tend to sexually harass us without even knowing that they are.”

Lee said that she had frequently been called to pour them drinks, while having their looks inappropriately assessed.

“The worst part is that they don’t even know that’s a bad thing,” said Lee, emphasizing the need for a stricter sexual discrimination education for the fellow employees.

Article 13 of the Act on Equal Employment and Work and Support for Men and Women highlights that sexual discrimination education in construction sites is mandatory. However, Kim said that such education isn’t held for part-time workers, and they only apply to full-time workers.

Regarding the weak sense of gender sensitivity in construction sites, Kim suggested that, “There is a time in the morning when the construction workers gather in front of desks to get their work schedule. It would be ideal if we tried to squeeze in sexual discrimination education for workers during that time.”

It’s not just attitudes, the equipment is also unsuitable.

According to a press release from Rep. So Byung-hoon of the Democratic Party of Korea, construction sites are issuing women with equipment designed for men, as construction sites had hired mostly male workers. This is causing inefficiency and more importantly, safety issues in the workplace.

Article 32 of the Ministry of Employment and Labor’s Rules on Occupational Safety and Health Standards states that employers are obligated to provide workers with protective equipment that meets the working conditions.

However, the rules do not specify that the equipment must fit properly, and it is left to the employees to pay for the additional costs if the given equipment is not the right size.

Regarding the situation, So said, “The number of deaths from safety accidents in the construction industry has been rising steadily, with 517 in 2019, 567 in 2020 and 308 as of June 2021. Despite such situation, the fact that safety equipment and protective equipment are not provided according to body size is unbelievable, and should be considered as a dereliction of duty by the Ministry of Employment and Labor.”