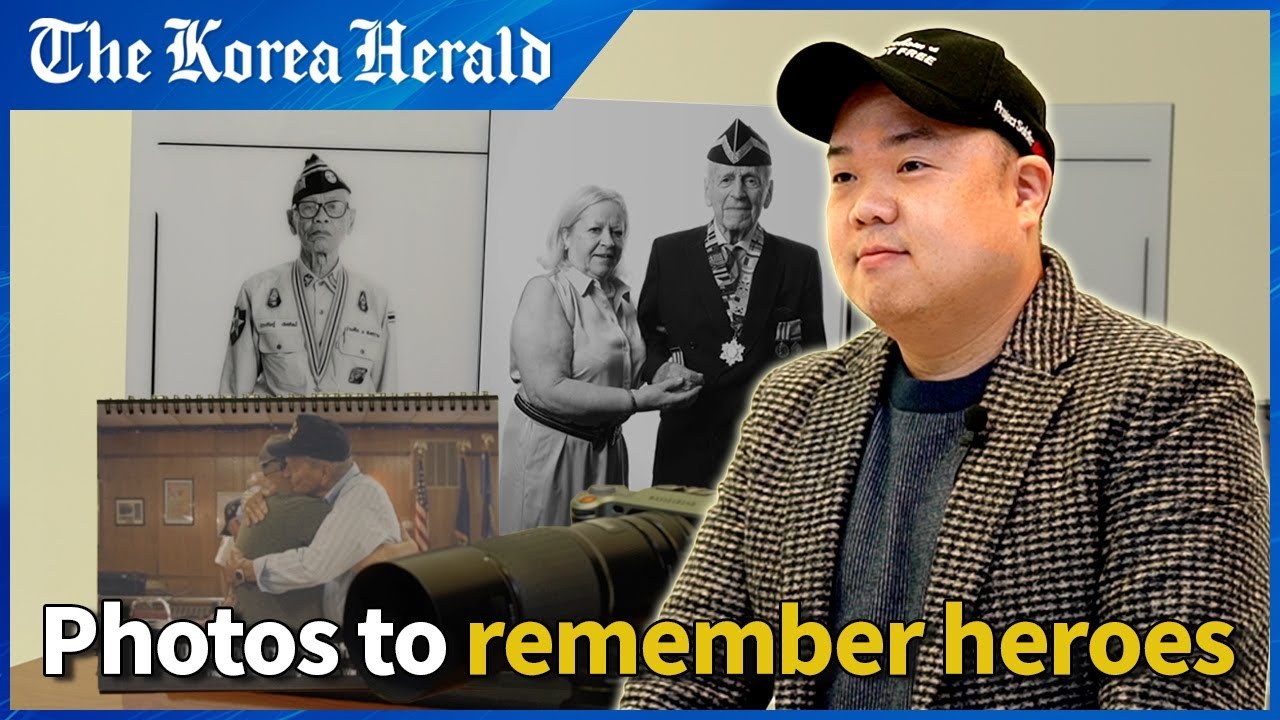 In the South Korean military, there is a saying among soldiers: “Our enemy is not North Korea, but the officers.”

This has become somewhat of a running joke among the troops -- most of them in their early 20s serving their mandatory duty required by law -- because the officers are usually the ones who discipline young soldiers or give them extra work.

That was what photographer Rami Hyun, who has taken pictures of more than 1,400 Korean War veterans across the world, used to think before he met a Korean Army sergeant major in 2013. The sergeant major was one of the 80 servicemen Hyun interviewed to produce a promotional video for the Korean Army.
“He told me that he spent three years in the general outpost over his 28 years of service but went home for less than 200 days during the period,” Hyun said during an interview with The Korea Herald on March 5. “Up to that point, I was thinking, ‘that is your job.’”

But it all changed when the sergeant major told Hyun that he was ashamed of himself as a father and a husband. Having put work first, the non-commissioned officer told Hyun tearfully that he did not spend much time with his family in his decadeslong service.

Hyun asked the sergeant major what he wished for.

“He said he wants to go on a family trip for the first time after he gets discharged from duty in two years as he will have completed 30 years of serving the country,” Hyun said. “I was shocked.”

The photographer realized that soldiers sacrifice not only their lives, but also their families’ to protect the country. So he wanted to help. Doing what he is good at, Hyun decided to take photos of soldiers and document their history.

Hyun’s first encounter with a Korean War veteran was when he first began photographing various military uniforms. He met a former US marine by chance during one of his exhibitions at Kintex in Goyang, Gyeonggi Province in 2016. Hyun simply thought the marine’s uniform looked outstandingly charming.

“When (the marine) introduced himself as a US Marine Korean War veteran, it felt different. His eyes and pride were different,” Hyun said, reminiscing the brief, yet memorable meeting.

The photographer returned to his studio to see how the photos turned out. When he saw how the US marine was brimming with pride in the pictures, he wondered why foreign soldiers would find such gratification in fighting for a country that was not even theirs. He decided to visit Korean War veterans in person, eventually leading him to start “Project Soldier, kwv,” taking portraits of former servicemen who fought for South Korea against the North 70 years ago.
Hyun’s first overseas trip led him to the UK. He set up an appointment with British Korean War veteran Alan Guy who lived in Virginia Water, about an hourlong-drive away from London. The photographer recalled being nervous because he did not know the retired soldier and he might not have liked talking about the war as it could be traumatic. The original plan was to quickly take pictures and wrap things up in 30 minutes.

“I really cannot forget the moment I opened the door,” Hyun said, with excitement in his eyes. “The look he gave me felt as if he had already known me.” Guy welcomed the Korean photographer with a cup of tea and cookies. The meeting lasted for five hours. Thinking he had become a forgotten veteran from a forgotten war, Hyun said the British veteran cherished the visit from a young Korean.
Unforgettable veterans

When Hyun visits Korean War veterans to take their photos, the retired servicemen ask him how much they need to pay for the portraits. Hyun then tells them that they already paid for the pictures seven decades ago and he has just come to pay off Korea’s debt.

At that point, most of them usually drop a tear or hug him. But there was one person who did neither. Former US Army Col. William Weber, who lost his right arm and right leg on the same day during the Third Battle of Wonju in February 1951, told Hyun he was “so wrong.”
“(A) free man has a duty. The duty is to restore and protect freedom for those who lost liberty,” Weber told Hyun, who recalled the conversation with a smile.

Weber fought in the Korean War as a professional soldier trying to secure freedom, so Koreans should not think that they owe him, Hyun said.

“He said if we achieved freedom, our duty is to give freedom to the people in the North,” Hyun said.

Another unforgettable veteran that stuck with Hyun during his project was British Capt. Christopher Coldrey. Hyun first saw the British veteran at a commemorative event for the 65th anniversary of the Korean War cease-fire in London in July 2018. The retired officer was in a wheelchair, Hyun said, but he stood up on his own to salute his fellow fallen soldiers at the war memorial. Hyun was amazed when Capt. Coldrey stood on his feet again as he took photos of the veteran.
The photographer returned to Korea to work on the pictures and flew back to the UK five months later to hand over Coldrey’s portraits. But he was nowhere to be seen at a local Christmas party. The war veteran’s wife told Hyun that he had passed away a week before his visit.

“That is the hard part,” Hyun said. “I wish I could make more portraits in a faster manner, so I can give them to the veterans while they are still alive.”

The project has never been easy for Hyun. The financial pressure, in particular, is the biggest and most difficult challenges the photographer has had to overcome. Having to pay for most of his expenses, including flight tickets and other travel costs, Hyun said he has considered each overseas trip as if it were his last.

But every time the photographer thought about giving up, he found help. Whether it was in the form of sponsorship or a donation, it paved the way for Hyun to carry on with the project in remembering the Korean War heroes.
“I consider myself a messenger,” Hyun said. “We are now lucky to have a chance to talk to war veterans (in person), but the fact is there are not enough records of their stories. If the next generation can see their photos and know why they made those sacrifices and what they were protecting, I would be very satisfied.”
By Kan Hyeong-woo (hwkan@heraldcorp.com)