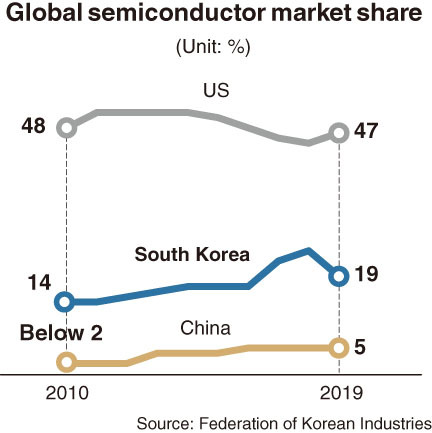 With China gearing up to enter the global semiconductor market, there have been notable changes in the market share of major memory chip producers in the last 10 years, data by the Federation of Korean Industries showed.

According to the FKI, the United States, home to chipmakers like Intel, Qualcomm and Micron, kept its solid lead in the market with around 45 percent share for the past decade. Its share slightly dropped from 48 percent in 2010 to 47 percent in 2019.

South Korea, the world’s biggest memory chip producer -- with Samsung Electronics and SK hynix leading the charge -- saw its share rise to 24 percent until 2018. But it then dipped to 19 percent last year.

Meanwhile, China, with the backing of massive government funds to raise its semiconductor self-sufficiency rate, saw its share expand from under 2 percent in 2010 to 5 percent last year.