But investors still find themselves confused as the virus continues to spread in other parts of the world and authorities voice warnings against “excessive optimism.”

The latest fluctuation came as foreign and institutional investors sold their shares and retail investors purchased a net 958.1 billion won ($785 million) worth of shares.

The tech-heavy Kosdaq closed slightly higher at 637.82, up 3.03 points or 0.48 percent from the previous session’s close, with individual investors scooping up shares worth 138 billion won.

While recognizing the market’s growth potential, analysts called for caution as the market first has to recover its previous 2,000 range to get back in full swing.

Lee Kyoung-min, senior investment strategist at Daishin Securities, suggested that Kospi would near the 1,960 mark shortly on the back of expectations for an economic recovery.

IBK Securities analyst Kim Ye-eun, in contrast, said the recent upward movement would most likely slow down, pointing to the possibility of a second wave of COVID-19.

Backing the optimism is the visibly increased volume of both domestic and foreign funds here.

According to the Korea Financial Investment Association, the amount of capital available for stock-related funds came to nearly 141.73 trillion won as of Thursday, up 27.34 trillion won or 23.57 percent from the day Korea confirmed the first case of COVID-19 on Jan. 20.

The figure reached 141.79 trillion won Tuesday, but inched down after the April 15 general election.

Stock-related funds refer to equities sitting around the market looking for investment opportunities such as investor deposits at securities firms, repurchase agreement balances, margin debts and other funds.

The surge was largely attributed to the retail investors’ hope that stock prices would rebound on the back of the government’s economic stimulus package and possibly an additional policy rate cut down the road. 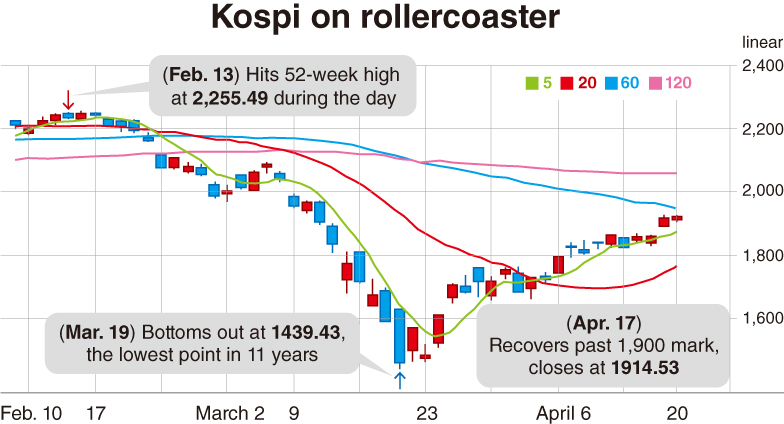 Experts forecast that the climb would continue as monetary easing actions around the globe lead to increased liquidity in the market.

Meanwhile, financial authorities are calling for caution against brokerage reports that recklessly encourage the buying of stock.

The buying spree has rekindled talk about the need for an independent financial market think tank that could issue impartial reports, not swayed by corporate client interests.

According to a report submitted to the National Assembly by the Financial Supervisory Service, among 32 local brokerages that issued corporate analysis reports in January-March this year, 30 said they had not made even one “sell” recommendation.

The two brokerages that included at least one “sell” recommendation in their reports were NH Investment & Securities and Daishin Securities.

The trend came while the country’s benchmark bourse Kospi dipped below the psychologically significant 1,500 line in March as foreign investors rushed out amid the escalating spread of COVID-19.

“The heavy bias toward buying is largely due to the business structure, which makes profits based upon the volume of transactions,” said Cho Nam-hee, chief of the Financial Consumer Agency.

“Also, securities firms often find it difficult to speak against the interests of their corporate clients. In some cases, they maintain a ‘buy’ stance even after lowering the target price of a specific stock.”

Pointing to the lack of an alternative market adviser, Cho called for the establishment of an independent think tank in the public sector to hold brokerages in check.

In contrast with local brokerages, foreign securities operating here turned out to have a wider spread of opinions. Of the 2,174 reports issued in the January-March period, 399, or 18.4 percent, included “sell” recommendations while neutral stances accounted for 21.4 percent, the FSS data showed.

Japan-based Daiwa Securities topped the list, as 89.6 percent of its reports suggested selling. Next was US-based Merrill Lynch Securities.