Retail investors in Korea are most active stock traders in Asia, outside China

According to the Korea Financial Investment Association, retail investor deposits on Thursday marked some 45.17 trillion won ($36.85 billion), up nearly 14 trillion won in March. Investor deposits refer to funds that are parked with brokerage accounts -- either before making stock purchases or profits earned after transactions.

The number of active security accounts has also exceeded 30 million for the first time, according to data compiled by KOFIA. The number reached some 30.64 million on the same day -- up over 1.08 million just in the last two months. The increase is nearly three times more than the figure a year ago, at 291,564.

Samsung Securities data also shows that many individuals have opened stock accounts for the first time. Over 100,000 accounts were created online and 11,000 accounts were opened at local branches in a month. The figure has nearly approached the annual record from last year, the firm said.

Likening the movement to the Donghak uprising led by peasants who sought to overthrow feudalism and foreign influences in the late 19th century, local reports highlight the strong drive behind stock investments by retail investors could soften the impact on the local stock market that is suffering from foreign capital outflows.

Not surprisingly, individual investors’ No. 1 preference stock was Samsung Electronics, which has seen its share price plummet 22.6 percent from the first day Korea confirmed the first case of COVID-19 on Jan. 20 to Friday. While foreign investors dumped some 7.23 trillion won of Samsung shares over last two months, retail investors purchased 7.43 trillion won worth, five times more than that bought by institutional investors including the National Pension Service. Foreign ownership of the nation’s tech giant fell from 57.15 percent to 55.15 percent in the cited period.

“Among the three types of investors, individual investors’ trading volume has hit the highest in history. In both the Kospi and Kosdaq markets, they net purchased 23 trillion won of local stocks,” Kim Min-gyu, an analyst at KB Securities said. “During the 2008 global financial crisis, the market saw a fight between institutional investors’ net buying and foreigners’ net selling. But now it seems to be (confrontation) between individuals’ net purchasing and foreigners’ net sales.”

Calling it unexceptional, experts said purchasing discounted Samsung stock at this difficult time may have been something that many individual investors learned from the past, with the strong belief that tech giant would thrive even more in the post-COVID era. Samsung Electronics takes up nearly 30 percent of market capitalization of the nation’s main bourse Kospi.

Individual investors attempt to profit by buying cheap equities in chaotic markets is not new. They did the same in the 1997-98 Asian financial crisis and 2008 global financial crisis.

“If you look at the price-to-book ratio, the Korean stock market is undervalued compared to other nations (in the first place). The value has further dropped, but individual investors decided to invest in large-cap stocks due to lessons learned from the past,” Kim Sang-bong, an economics professor at Hansung University said.

“Comparing the stock prices back in the 1980s and now, Samsung shares have risen nearly 22-fold. Since stock prices in overseas markets are difficult to track in real-time, individuals prefer to invest in local manufacturing firms.” 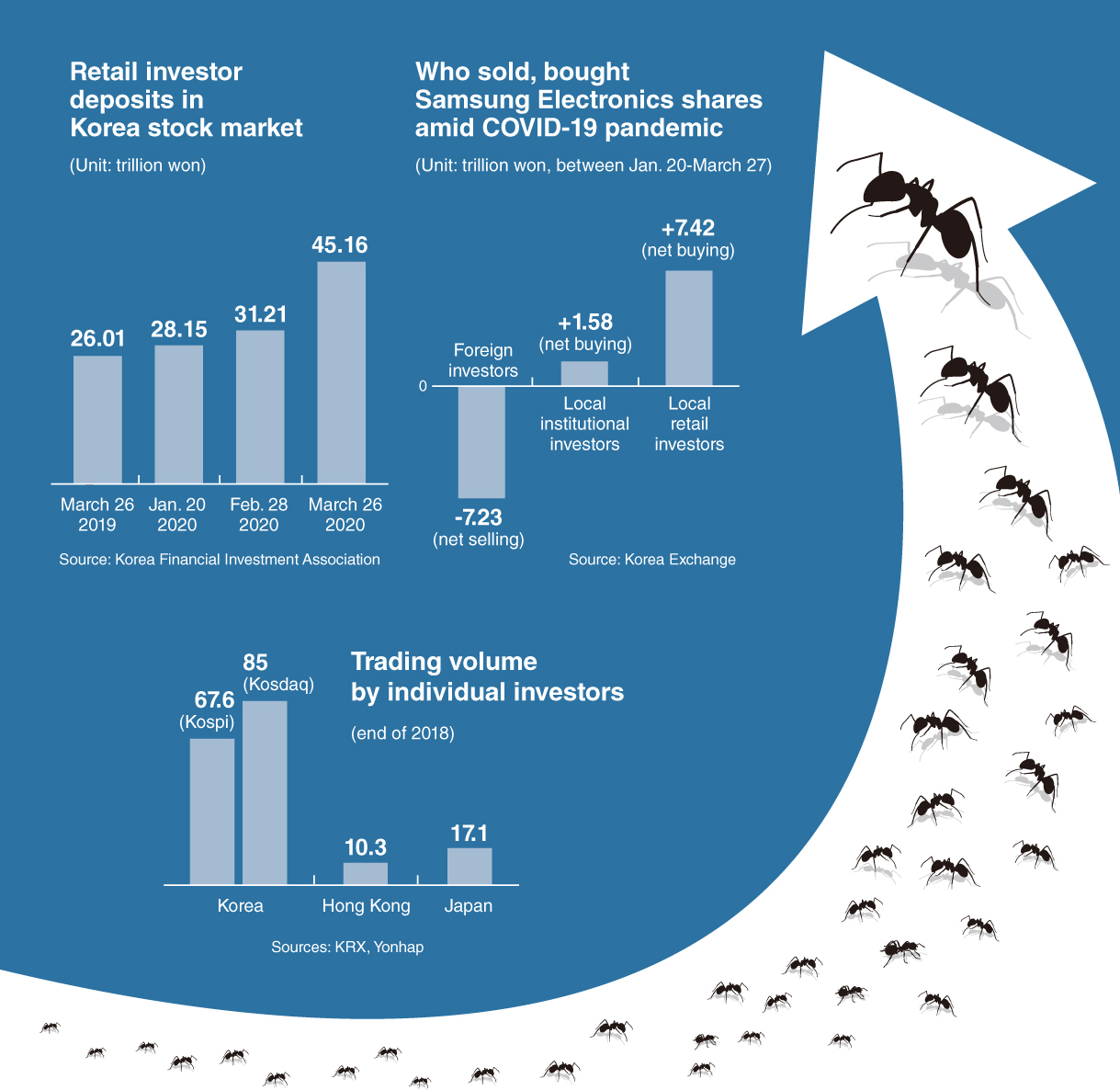 Free-float retail investors in Korea are often called as “gaemi,” or ants, half-jokingly to refer their active trading style that brings up the image of hardworking and diligent ants. Despite their activeness, they lack information to analyze markets and the power to influence the market under.

Data suggests that individual investors in Korea are the most active traders in Asia, except for China.

In terms of stock trading volume, retail investors in Korea topped the list with a whopping 67.6 percent, while foreign and institutional investors came in at 18.4 percent and 14 percent, respectively, according to the Korea Exchange showed.

In contrast, retail stock transactions stood at 17.1 percent and 20 percent in Japan and Singapore. The figure in Hong Kong, whose market capitalization is six times bigger than South Korea’s, was 10 percent.

“The Korea Exchange has stopped announcing the individual ownership in the market but looking at the trends, I assume the portion will be below 30 percent, close to 20 percent by now,” said Hwang Seiwoon, a research fellow at the Korea Capital Market Institute, suggesting that it is his own estimate.

“However, it is true that individuals’ trading volume is extremely high compared to their share of the market. It’s because of their ‘short-term buying and selling’ practice,” he said.

What keeps gaemi’s power far weaker than foreign and institutional investors is their tactic of pursuing short-term profit and lack of consistency in investment strategy.

A report by Kim Yoon-min and Jo Gab-je, published last year on the impact of foreign investors on stock prices of Korean enterprises, said individuals tend to sell stocks quickly after making a small profit during market uncertainties.

One of the most important roles of institutional investors in times of volatility, is to prevent capital flight or sudden stops caused by speculative attacks by offshore investors in a sluggish stock market, they added.

“Stock investing is like a game between individuals versus institutions (foreign and institutional investors). Since most offshore investors are institutions, which move by systems and have more capital and ability to analyze data, individuals can’t beat them,” said Hwang of KCMI.

“Honestly, the majority of individuals can’t make profits, since they buy and sell stocks for the short term. They may cut their losses if they invest in solid firms for the long term, for at least five years.”

According to KRX data, the foreign ownership previously accounted for 40.1 percent as of the end-October, 2003, marking the highest record in history. However, it plummeted to 33.94 percent on Monday, falling 1.11 percent from Jan. 20, suggesting their holdings were now worth below 393 trillion won.