According to recent data from the Ministry of Strategy and Finance, national tax revenue amounted to 251.9 trillion won ($236.5 billion) in the first 11 months of 2017, exceeding the yearly revenue goal of 251.1 trillion won. The ministry estimated taxes collected for the whole of last year would reach 270 trillion won, up from 242.6 trillion won a year earlier. 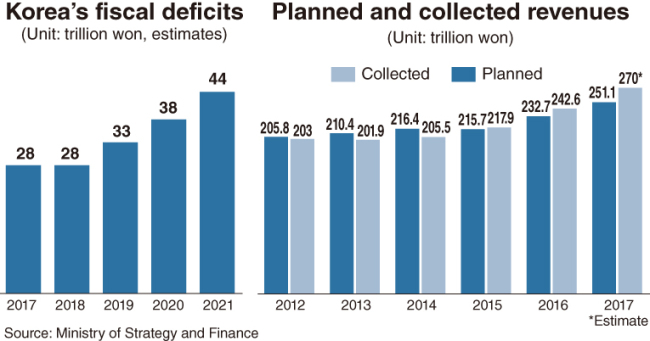 Government budget planners attributed such excess revenues to a rebound in consumption and a continuous rise in exports.

Experts note it is not necessarily desirable to collect more taxes than originally planned.

“A more accurate prediction of tax revenue would have led to more timely and proper fiscal spending to help bolster the economy and create more jobs,” said Ahn Chang-nam, a taxation professor at Kangnam University.

Excess revenues might siphon off money that could otherwise have been spent in the private sector.

Kwon Tae-shin, head of the Korea Economic Research Institute, a private think tank, said collecting too much taxes would reduce the efficiency of the entire economy by increasing money funneled into the public sector with relatively low productivity.

According to Bank of Korea data, the government’s share of the country’s total disposable income grew from 22 percent in 2015 to 23.1 percent in 2016, while the corresponding figures for households and companies contracted from 57.2 percent and 20.8 percent to 56.9 percent and 20 percent, respectively, over the cited period.

There has been argument that it is undesirable to raise tax rates to transfer a higher proportion of corporate and individual earnings into state coffers when revenues have continued to exceed the government target.

A tax code revision passed by the National Assembly last year raised the ceiling of rates applied to corporate profits and individual incomes from 22 percent and 40 percent to 25 percent and 42 percent, respectively.

“Boosting corporate activities by lowering tax rates would be better for securing more revenues in the long term,” said Kwon.

The excess revenues in the past three years contrast with a series of annual revenue shortages from 2012 to 2014.

They note fiscal authorities are to blame for neglecting to take into account factors that affect revenues, including changes in the economic environment and taxation system.

Revenue increases in recent years are dwarfed by huge fiscal deficits envisaged by President Moon Jae-in’s administration, which is pushing for a sharp increase in government spending to expand welfare programs and create more jobs mainly in the public sector.

Experts say financing his populist programs could cause even more deficits.

“The country’s fiscal health might worsen dramatically, if there is an unforeseen need for expenditures under the thinly stretched fiscal management plan,” a researcher at a state-run think tank said, asking not to be named.

Korea’s national debt is estimated to have reached 682.7 trillion won last year, worth 40.4 percent of its annual gross domestic product.

The country’s debt-to-GDP ratio remains lower than the 116.3 percent average of 30 member states of the Organization for Economic Cooperation and Development surveyed in 2015. The corresponding figures stood at 108 percent for France, 126 percent for the US and 238 percent for Japan.

What is worrying is the rapid pace at which Korea’s national debt has been increasing.

According to a study by the National Assembly Budget Office, its national debt expanded by an annual average of 11.5 percent for 2010-2015, far faster than the OECD average of 7.3 percent.

Economists say fiscal deficits might be manageable during Moon’s presidency but would be simply unsustainable in the longer term.

“National debt may not be seen as a serious problem as long as the economy continues to grow robustly,” said Lee Tae-suk, a researcher at the Korea Development Institute, a state-run think tank.

With the country’s growth potential weakening amid rapid population aging and a low birthrate, it is worrisome that fiscal expenditure has been framed for a steep increase, he said.

A BOK report released last year indicated changes in the country’s demographic structure would result in a significant reduction in revenues, except for consumption tax, over the coming decades.

The government projects Korea’s debt-to-GDP ratio would reach 137.7 percent by 2050. According to the parliamentary budget office, the figure is estimated to be close to 220 percent in 2060.

“The administrations to come on the heels of the Moon government may be destined to shoulder unbearable burdens,” Lee said.