Importance of FTA to be highlighted at Korea-US summit

During the summit, Moon is slated to spearhead delegations that are to highlight the importance of the five-year Korea-US Free Trade Agreement as well as address looming uncertainties regarding the US’ attempts to renegotiate it -- a crucial economic issue here since Trump took office in January.

With his “America First” foreign policy, the US President has vowed to renegotiate or opt out of international trade pacts in an effort to help claw the world’s largest economy out of its trade deficit and ensure the interests of working-class Americans come first.

During an interview with Reuters in April, Trump referred to the trade pact with South Korea as “unacceptable” and a “horrible deal.” He also said that his administration intends to renegotiate the Korea-US free trade pact following the revision of NAFTA with Canada and Mexico.
According to Trump, the trade agreement between the two economies has resulted in America’s trade deficit reaching $28 billion. He has vowed to revise or terminate the KORUS FTA, which he referred to as a “job-killing” disaster.

According to the US Census Bureau, the free trade agreement has resulted in an annual average of more than $65 million in exported goods to the US from export-heavy Korea since its enactment.

But the uncertainties surrounding the pact have resulted in a drop in Korea’s trade surplus. According to data from the US Department of Commerce last month, the country’s trade surplus with the US dropped nearly 25 percent in the first quarter of this year, with its US trade partner ranking falling from No. 6 to No. 8.

Compared to the first quarter of last year, the country’s trade surplus with the US decreased by roughly $1.9 billion or 24.6 percent this year -- the largest drop recorded among America’s 10 major trade partners.

However, according to the Korea Institute for Industrial Economics and Trade earlier this month, the reneging of the free trade agreement between Seoul and the US would be more detrimental to American companies than Korean firms.

The institute said that if the KORUS FTA is nullified by the Trump administration, American companies that export goods to Korea would be hit with higher import duties. US tariff rates on Korean companies would only be subject to 1.6 percent taxation, while American firms shipping to the peninsula would be subject to a minimum of 4 percent in duties, as Korea maintains higher tariff rates compared to the US. 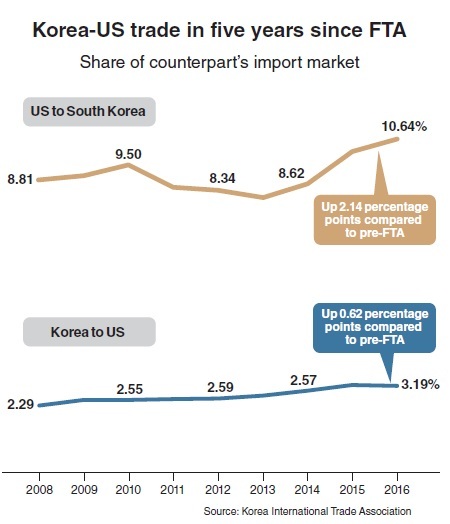 “If the two-way FTA is nullified, both Seoul and Washington must apply the most favored nation status to trading partners under World Trade Organization rules,” according to a KIET official. “Considering this, US exports to Korea would have a greater impact than Korean firms trading with the world’s largest economy, which already maintains low tariff rates.”

Ahead of the Korea-US summit, the heads of the American Chamber of Commerce in Korea held a press conference earlier this month to reveal their “Buy American Fund” proposal, encouraging President Moon to introduce a fund for purchasing US goods.

“President Trump will love it, tweet about it and he will think of President Moon as his friend,” said Jeffrey Jones, former AmCham chairman and foundation chairman of Partners for the Future Foundation, adding that a buy American fund could help ease trade tension between the two countries.

“I believe the proposal will make President Trump very happy and help alleviate much of all the pressures regarding the KORUS FTA,” he added. “It would also demonstrate Seoul’s commitment to purchasing American goods.”

Jones said that the idea came about after a recent trip to the US during annual meetings with policymakers to discuss issues related to trade between the two nations.

Many local industry and business figures have praised the economic and political benefits that arose from the KORUS FTA, referring to it as a mutually beneficial pact. But Kim Jong-bum, an international trade law professor at Yonsei University, says it is still too soon to analyze the full spectrum of benefits delivered by the pact.

“The KORUS FTA has been a win-win deal, (but) the current FTA put in place trade liberalization mechanism that takes at least 10 years for completion,” Kim told The Korea Herald. “It will continue to provide additional benefits in the future as tariff elimination on trade between the two countries are taking place, (but) it’s premature to evaluate the full benefits of the FTA when only half of the benefits have been harvested.”

Attorney Song Ki-ho from Lawyers for a Democratic Society said that society should look at the components of the FTA from a wider spectrum including the potential democratic restraints of international trade and tariff abolishment.

“Although the KORUS FTA does provide certain merits for both nations, issues regarding trade agreements are not merely about the number of imports and exports between two countries,” Song, a trade law expert, told The Korea Herald. 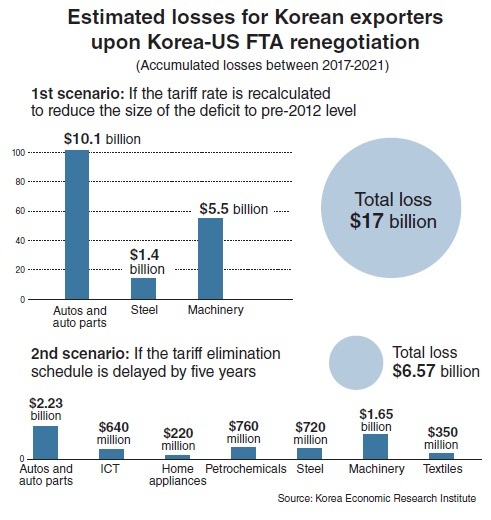 The Korean government first drew a long-term road map in 2003 to seek bilateral free trade deals with massive economic blocks such as the US and EU.

Negotiations for a free trade deal with the US started in February 2006. After eight rounds of negotiations, the two countries concluded the Korea-US Free Trade Agreement in April 2007.

However, ratification by the US Congress, then controlled by the Democratic Party, was delayed due to concerns over US car and beef exports. At that time, then-President George W. Bush’s fast-track trade authority was also nearing expiration.

The agreement was first signed in June 2007. It was renegotiated and signed again in December 2010. The US and Korean lawmakers ratified the deal in 2011 and it took effect in March 2012.

Meanwhile, a recent report by Korea’s state-run trading arm showed that the bilateral trade agreement has positively contributed to US businesses, as well as to Korean firms.

The Korea Trade-Investment Promotion Agency said in the report that 28 US importers and exporters interviewed by KOTRA said their businesses grew in size and price competitiveness improved during the period of 2011-2016.

The FTA allowed 18 US importers more access to wider global suppliers, which helped them reduce costs and enhance price competitiveness, the report said. For 10 US exporters, the trade pact enabled them to make use of the Korean market as an outpost for the Asian market and ensure protection of their intellectual property in Korea.

The report also said the Korea-US FTA helped Korea overall in terms of trade of goods and the US in trade of services.

US shipments to Korea fell 3.1 percent from $44.6 billion in 2011 to $43.2 billion in 2016, but the drop would have been greater without the bilateral trade deal, as Korea’s total imports from global markets plunged 22.5 percent during the cited period.

In terms of the service account, the US’ surplus widened to $14.1 billion in 2015 from $11 billion in 2011. The leading exports of US services to Korea are travel-related services, intellectual property, such as industrial processes and computer software, and services in the transport sector, according to the US Trade Representative.