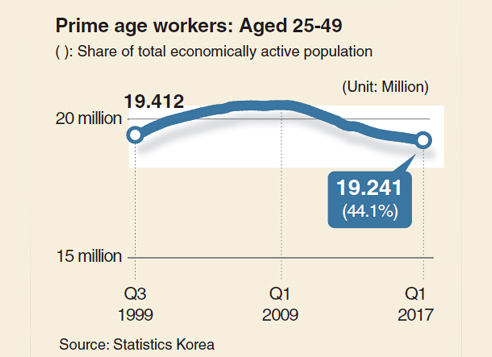 The proportion of those in their prime working age out of the total economically active population dropped to its lowest point in the first quarter this year, Statistics Korea data showed Saturday.

The number of those in the 25-49 year age group was 19.241 million in the period, dropping 0.4 percent from the same quarter last year. That accounted for 44.1 percent of total economically active people, which is 43.633 million. This is the lowest rate since data was first collected in the third quarter of 1999.

The ratio of prime-aged workers continued to decline after reaching a peak at 54.4 percent in 2001, due to a low birthrate and aging society.

Those aged between 25 and 49 are considered to show the highest productivity and consumption power, meaning a drop in the number of this group leads to a weaker growth potential.