Held in the event hall on the fourth floor of Seoul 63 Square, the event was attended by SsenStone’s partner companies, which serve as suppliers of SsenStone’s products and services. 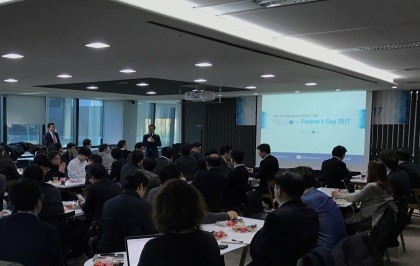 SsenStone CEO Yoo said, “SsenStone, a small company, has been able to achieve such remarkable progress by having advocated partner policies based on exclusive distribution since the early days of the company. Unless a client specifically requests a direct contract, our basic policy is to provide technology and exclusive distribution rights via direct sales and supply via our partner companies.”

The event was attended by SsenStone’s exclusive distributor, iMarketKorea, and over 50 partner companies, which are classified into three categories: sales, development, and those involved in both. Since 2016, the tasks of development and securing contracts have been carried out through partner companies.

Yoo said, “For a domestic authentication security solution company to be listed, it typically has to earn at least 10 billion won ($8.5 million) annually. What makes this difficult, however, is that companies’ sales and business divisions must be expanded in proportion to sales. SsenStone avoided this business structure from the very beginning by conducting sales on both a national and more intimate level through its sales and development partners. SsenStone’s strategy is to grow and develop through cooperation with companies that operate development divisions.” On Jan. 5, SsenStone announced that its sales goal for 2017 is 5 billion won.

The Partner’s Day event focused on SsenStone’s partner companies in the Seoul-Gyeonggi area, but the company is also planning to host the event in other cities as well. SsenStone is a resident company of the startup incubator operated by the Gyeonggi Center for Creative Economy & Innovation, from which it also receives support in various areas, including marketing.