“Samsung is already capable of mass producing foldable phones -- although premium models are usually made in small quantities -- by late next year. But, the company is not sure whether there is market demand for the costly, foldable devices,” a source told The Korea Herald on condition of anonymity.

“If (the market condition is) confirmed, foldable tablets -- instead of smartphones -- are likely to be unveiled with panels facing outward,” he added.

The outward panels have less technical burden than inward panels because of larger radius of curvature, he explained.

Samsung had shown a cautious approach on the rollout of foldable phones in its conference call in October, citing technical issues with some parts. Although display panels are already able to be curved, there were some curving issues remaining for glass sheets and batteries, the company had said. 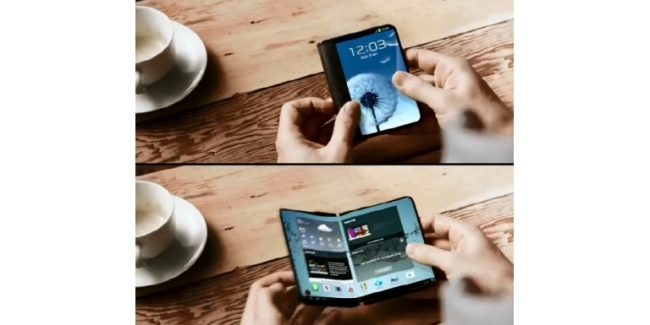 However, experts said most of the technologies are now ready for foldable devices.

Last month, Kolon Industries, the chemical unit of Kolon Group, said it was set to mass produce transparent polyimide films called CPI, to replace the hard glass sheets of smartphones, by early 2018. This is the first company globally to mass produce such films. It also provided some samples for Samsung and LG.

“Kolon is also able to produce around one million units of the films as pilot production in the second half of next year,” said Son Young-joo, an analyst at Kyobo Securities. This means Samsung can produce foldable devices in a small quantity late next year.

As for batteries, although Samsung SDI is not able to mass produce foldable batteries for the time being, experts said that is not an issue because batteries do not need to be flexible.

“Batteries can still be placed in the flat sides instead of folded areas. In order to place the battery in the folded area, it should be rollable, for which the technology is still in the research and development stage,” said Chung Won-seok, a researcher at HI Investment & Securities.

Industry sources said Samsung’s hesitancy in launching foldable devices is actually because of yield -- which refers to the amount of salable products able to be produced -- and market demand.

“Although Kolon is able to produce the film, the production may have low yield initially, which means less profitability. Samsung is not sure whether consumers would open their wallets for the expensive foldable devices,” an industry source.

Although the tech giant has continued to show the prototype of its foldable devices in global events and conferences over the past years, the company recently shifted its focus, by adopting new software such as artificial intelligence for Galaxy S8.