By Kim Da-sol
Published : Oct 17, 2016 - 16:50       Updated : Oct 17, 2016 - 18:02
South Korea’s demands on natural resources have been outstripping supply for the past four decades or so. And the deficit has been widening at such an alarming pace that environmentalists both here and overseas call for immediate attention to the issue.

Calculated by the Global Footprint Network, a country’s ecological balance shows how much natural resources a country has and how much it uses.

The supply is measured by biocapacity, which is the capacity of a given biologically productive area to generate a supply of renewable resources and to absorb its spillover waste. Consumption is assessed in terms of ecological footprint, which is the amount of land required to sustain a person’s use of natural resources. 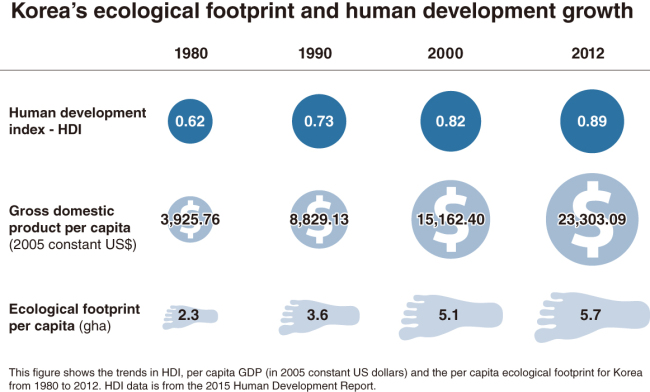 “(In the) 1960s, Korea’s ecological footprint grew to exceed its biocapacity as Koreans demanded more from nature than our ecosystems could provide. Korea has run an ecological deficit ever since,” writes Global Footprint Network in its report “Korea Ecological Footprint Report 2016,” jointly published by GFN and the World Wide Fund for Nature, Korea.

Globally, humanity’s overall demands on biocapacity outstrips global supply by 64 percent. In Asia-Pacific, the demands placed on biocapacity now exceed the region’s supply by 150 percent. Korea demands eight times more from nature than the ecosystems within its borders can sustainably provide.

Theoretically, a country can run a biocapacity deficit, as long as it can access extra resources and ecosystem services from elsewhere.

But the problem is more countries around the globe are becoming biocapacity importers, leading to increased competition for constrained resources. Among them are Korea’s key trade partners and global powers -- the United States, Russia and China.

Climate change compounds the challenges of growing ecological constraints and puts our ecological and economic wealth at risk.

For instance, the rise in sea levels is an impact of climate change in South Korea.

According to the Environment Ministry last year, the southern island of Jeju saw a rise in sea level at a rate that was three times higher than the global average.

Ocean temperatures near the Korean Peninsula are also increasing rapidly. The country also experienced an unprecedented heat wave this year, which continued for a record-breaking 24 days, with the temperature reaching up to 37 degree Celsius in Seoul and the lowest amount of rainfall since 1973.

With such temperature ups and downs, climate change can have a domino effects on agricultural crop yields, ecosystems, public health and other areas of Korean society, experts say.

As a whole, Korea has much to benefit from phasing out fossil fuels and transitioning to renewable energy.

“Our country, which produces not a single drop of oil, has nothing to lose and much to gain from the shift from coal, oil and gas to non-fossil energy,” said Dr. Lee Hoe-sung, chairman of the Intergovernmental Panel on Climate Change.

“Businesses that regard such a shift as just costs need to see it from a far longer term perspective,” he added.

As part of a historic agreement in Paris late last year, Korea pledged to reduce greenhouse gas emissions by 37 percent from the business-as-usual level by 2030 across all economic sectors including energy, industrial processes and product use, agriculture and waste.

Separately, before the Paris agreement, Korea set a goal for new and renewable energy to supply 11 percent of primary energy by 2035, according to the fourth New and Renewable Energy Master Plan of the Ministry of Trade, Industry and Energy in 2014.

The government needs to reduce the amount of fossil fuels needed, experts added. As of 2014, fossil fuels accounted for 39 percent of South Korea’s total power sources. The South Korean government also recently announced that it would built 20 more coal-fired power plants by 2022.