This marks the first time for the national budget to exceed 400 trillion won with about one-third of it allocated to spending on welfare, or 130 trillion won, the highest. 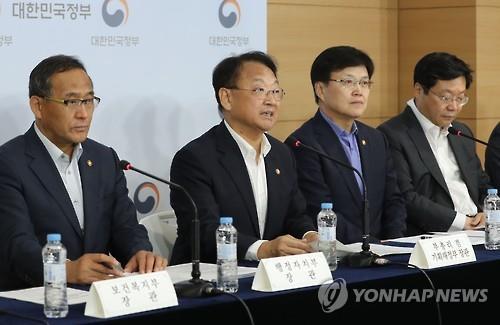 Of 130 trillion won allocated to social welfare, the budget includes spending 17.5 trillion won, up about 10 percent, on job creation for young people. The money will be used to support startups in the fields of content creation and augmented and virtual reality as it seeks to address rising youth unemployment.

The youth jobless rate stands at 12 percent, and as of last year, Korea was one of the five economies that saw its youth unemployment rise rapidly in the Organization for Economic Cooperation and Development.

The 400 trillion won budget to be partially financed by state bonds is expected to increase its national debt in proportion to its gross domestic product to over 40 percent, despite a forecast of 6 percent more tax revenue next year on improved domestic consumption and corporate earnings.

The Finance Ministry said that the budget was devised with the aim to reduce its fiscal deficit so that it can maintain the debt-to-GDP ratio to around 40 percent over the next four years. It seeks to reduce the deficit to 28.1 trillion won next year and 20.4 trillion won by 2020, from some 39 trillion won this year. This reduction will enable it to keep the ratio at the 40 percent level.

“We pursued an expansionary budget this year, but next year, the budget was drawn up with a consideration of maintaining fiscal soundness,” Vice Finance Minister Song Eon-seok told reporters.

This would require fine-tuning and reorganizing some of its state projects by government agencies that seem to overlap and increase unnecessary costs, the ministry said, in order to improve its finances.

The 3 percent budget increase is already drawing criticism from the opposition Minjoo Party of Korea, who said that it was not only one of the slowest spending increases but also lacked substance ways to improve the country’s low birthrate and aging population.

It also said the Park Geun-hye administration had been excessively reliant on state bonds to finance the budget, issuing five times more than the Roh Moo-hyun administration. The 2017 budget has doubled compared to 12 years ago.

“The government is running the country on debt without properly executing the budget,” a Minjoo Party lawmaker said.

The Bank of Korea Gov. Lee Ju-yeol also said in an economy-related meeting on Tuesday that the government needs to come up with a better policy on low birthrates and population aging.

“The country will start to see its working-age population decrease next year amid an aging society, which immediately calls for diverse measures,” Lee said.

“The government may have put some effort into it, but it does not seem to be sufficient.”