But she often uses Korean international shopping support services websites to actually purchase items sold only via international websites, due to the convenience of having product descriptions and payment details and methods provided in Korean.

“A wider range of choices is easier to view on a Korean (shopping support) website. Sometimes it’s cheaper and only a few clicks away,” said Choo.

International shopping support services are Korean online retailers that sell items that are sold on international websites at international prices. There are currently 538 websites in operation registered with the city’s approval of e-commerce according to Seoul Electronic Commerce Center.

But despite consumers’ convenience of ordering and paying on the go, the retail prices checked on the website often change due to exchange rate fluctuations. The easy payment method also usually does not apply when trying to get things returned or refunded.

And the number of complaints from consumers have been on the rise, according to the Seoul Metropolitan Government on Thursday. 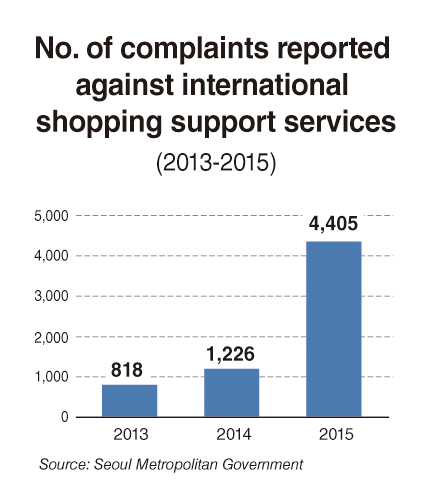 A total of 4,405 complaints against international shipping support services were reported in 2015. That number is more than a fivefold increase from 2013.

According to the SECC, consumers in their teens reached out for help, followed by those in their 30s and 20s.

“Young students who opt for overseas purchasing are easily influenced by the clothing choices of celebrities, whose fashion items are normally expensive and hard to purchase in Korea,” SECC added in a statement.

Consumers and industry insiders’ calls to implement related regulations are growing, since many of the users are not aware of follow-up steps when not satisfied with purchasing overseas.

Another online shopper, Park Hye-jin, said she was confused when she first noticed that a website she frequently used offered different commission fees based on the language setting.

“I didn’t know it was cheaper to order items when the website setting is in English,” she said, regretting that she hadn’t known the tip earlier.

According to Seoul’s public economy division, for now, it is up to the consumers to check the terms and conditions on each website.

“International shopping support websites are currently classified under domestic online shopping malls, which is not exactly in keeping with such services’ characteristics,” said Choi Eun-hee from public economy division.

“Specific regulations related to refund processes or international shipping should be implemented since the city (government) has categorized them as that king of shopping mall under current law, making actual monitoring really difficult,” added Choi.

In August 2015, the Fair Trade Commission probed terms and conditions of 23 international shopping support websites and ordered them to fix regulations that were unfair to consumers.

Well-known shipping support services such as eHANEX, operated by Hanjin, and 17 other companies did not post regulations on their websites regarding returning consumers’ extra costs in case of foreign exchange or changes in customs tariffs.

The commission revised relevant guidelines last summer to protect consumers, such as by recommending that the services automatically notify users of changes in payment and reward methods.