NPS under pressure to reform after Samsung-Elliott battle 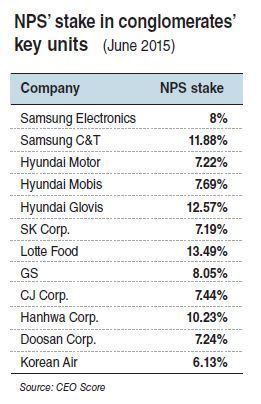 Following is the last in a four-part series featuring the battle between Samsung C&T and Elliott Associates over the Korean builder’s merger with Cheil Industries and its implications. ― Ed.

The National Pension Service is facing growing pressure to reform its decision-making process after it participated in a crucial vote on a $8 billion merger deal between Samsung C&T and Cheil Industries last Friday.

The NPS, the nation’s largest investor with assets of 500 trillion won ($430 billion), voted for the controversial merger plan, playing a decisive role in its passage.

The single largest investor of Samsung C&T with an 11.2 percent stake has yet to reveal why it supported the merger proposal.


Ahead of the vote, shareholder advisory firms including Institutional Shareholder Services recommended to oppose the deal, saying it undermines the interest of shareholders. Despite this, NPS’ internal fund investment committee decided to vote for the deal.

Some news reports said outside pressure may have affected the NPS’ voting decision because generally, the agency’s external expert panel tends to decide whether to support or oppose an M&A deal at a shareholders’ vote.

As a case in point, the external panel made a decision to oppose the merger deal between SK Holdings and SK C&C last month. But the NPS didn’t ask the panel to discuss the agency’s stance toward the Samsung deal.

“As a public money manager, the NPS has to explain why it made an exception in its decision-making process for the vote on the Samsung deal,” said the Solidarity of Economic Reform, a progressive civic group, on Monday.

Some capital market experts pointed out that the fund could not ignore the request for support from Samsung Group, the nation’s largest conglomerate, which was under attack by the foreign hedge fund seeking short-term gains.

“The NPS seems to have cast a yes ballot on the Samsung’s merger plan, considering the mid- and long-term impact of its decision on the national economy,” said professor Oh Jung-geun of Konkuk University in Seoul.

Some critics, however, expressed concerns that the NPS could face similar cases again, considering the structural weakness of Korean conglomerates in their governance.

The biggest issue related to corporate governance in Korea is the big gap between ownership and control, which offers hedge funds room for an attack when they seek changes in their governance.

This is why companies have no choice but to woo the NPS to protect themselves from attacks by hedge funds. With the size of the pension fund expanding rapidly, it has bigger stakes than those of owner family members in many conglomerates and their key units.

The fund also holds a 7.22 percent stake in Hyundai Motor, which is higher than 5.17 percent owned by company chairman Chung Mong-koo.

“The NPS needs to do its business in a more transparent and consistent manner to avoid criticism that it misuses people’s money,” an analyst said.

In an effort to improve NPS’ decision-making process and fund management skills for better returns on investments, the government is seeking to separate the National Pension Fund Investment Office from the NPS and to turn it into a public corporation.