With the holiday season including Lunar New Year and school breaks in February, the jobless rate increased on-year, the statistics bureau said. Also, companies do not usually start recruiting new employees or college graduates in the same month. 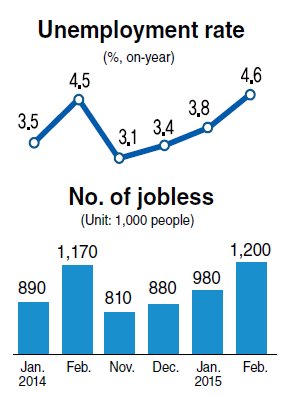 In the same line, the country’s youth unemployment climbed to 11.1 percent last month, the highest since July 1999, when it stood at 11.5 percent as companies downsized amid the economic slowdown.

“The unemployment rate usually comes out high in February as it is normally a period when there are school breaks,” said a Statistics Korea official.

When taking into account those who are working part-time and studying for corporate entrance exams, the youth jobless would be much higher at around 12.5 percent, the statistics office said.

However, the overall employment rate reached 58.8 percent in February, up 0.2 percentage point from the same period a year ago.

Deputy Prime Minister and Finance Minister Choi Kyung-hwan had raised concerns over high youth unemployment, saying that the problem lied with the fundamental structure of the labor market.

He said the labor sector needed to reform by achieving a balance between job security and flexibility.

Another underlying problem is the surplus of overeducated young people with very little practical experience who seek a limited number of jobs offered by leading Korean conglomerates, which account for more than half of the country’s job growth, market observers said.