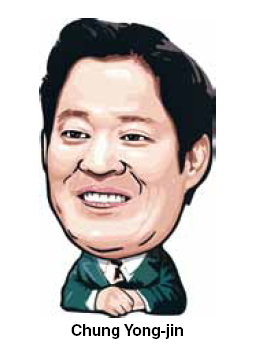 The vice chairman of retail giant Shinsegae Group was cleared of suspicions that he ordered an illegal surveillance of his employees to block them from organizing a labor union, state prosecutors said Sunday.

Chung Yong-jin has been investigated over allegations that the nation's largest discount outlet E-Mart, run by Shinsegae, systemically attempted to undermine the organization of a labor union through various illegal methods.

Wrapping up a five-month probe, the Seoul Central District Prosecutors' Office said it has dismissed charges against Chung, saying that it did not find any evidence that the 45-year-old vice chairman was involved in a crime.

It said Huh In-cheol, the chief executive of E-Mart, was also cleared of the same charge.

Five former and incumbent executives of E-Mart, including its former chief Choi Byeong-ryeol, were instead indicted on charges of breaching labor laws by taking disciplinary measures against the employees to block union activities, investigators said.

The breaches included using workers' resident registration numbers to monitor if they had joined a union, according to the investigators.

The allegations involving E-Mart were first divulged in January when opposition lawmaker Jang Ha-na exposed that the retail giant spied on its workers under the guidelines set by its parent company Shinsegae.

The lawmaker also disclosed E-Mart's internal documents in which its employees were allegedly classified by the level of their discontent with the firm and the likelihood of organizing a union.

The probe opened after a coalition of civic groups lodged a complaint with the prosecution and the labor ministry.

State prosecutors and the ministry have since raided the company's headquarters in eastern Seoul twice and its 13 stores nationwide to seize documents to search for the link between the top management, including Chung, and the alleged surveillance activities.

Amid mounting suspicions, Chung stepped down from the boards of Shinsegae and E-Mart in February. (Yonhap News)