Picturing Seoul to send to the world


Hundreds of Seoulites are posing for portraits to join a global street art project for World Peace Day.

The Inside Out Project aims to capture images of people in 17 countries before sharing the posters as public art in cities across the world on Sept. 21.

The project inviting participants to “Be the Change” aims to connect people from different countries and cultural backgrounds to help them share their respect for the natural and human environments.

French street artist JR started the project in 2011, and went on to win the TED Prize that year. The concept has since grown to include 23 participating cities, across which 10,000 large-scale black-and-white portraits are set to be pasted.

Seoul organizers Rachel Shires and Ariadna Rico are currently taking pictures of 500 people in the Korean capital before sending the images to JR to be printed and exchanged for those taken in the other cities. 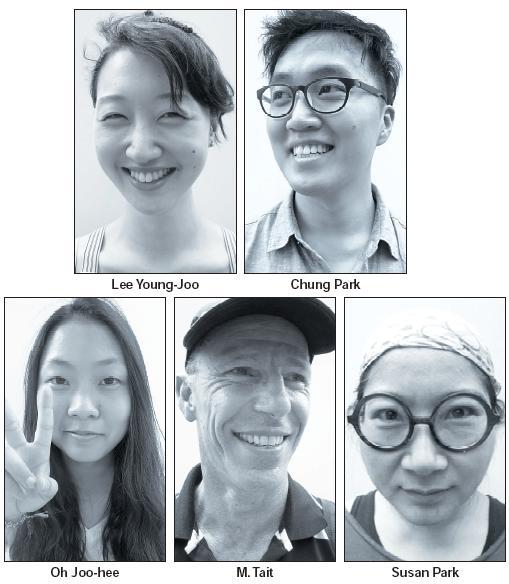 On Sept. 21 and 22, the English kindergarten teachers and a team of volunteers will paste the international portraits around the streets of Seoul to celebrate global diversity.

Rico, 30, first heard about the project from a friend who participated in their hometown of Juarez, Mexico, last year. And co-worker Shires, from Connecticut, U.S., was keen to help her run the project for the first time in Seoul.

“I have always wanted to do something on a global scale,” the 25-year-old said. “I think that people think that world peace is a very cliched concept, but I love this artist’s work. His message is very hopeful ― it spoke volumes to me. If I could pass this feeling on to just one person I’d feel like my goal would be accomplished.”

And Rico said she’d wanted to organize the Korean branch of the project to display images of different cultures here, and to bring cheer to streets around the world.

“Perhaps one day you will be walking on the street and feeling a little sad and then you see this poster of a huge smiling face and feel happy in that moment,” she said.

Posters will be put in the most prominent places around the city, with Hongdae and along the Han River already being eyed as good spots.

“This is the first time it has been done in Seoul and it is the first time that the project will exchange photos with other countries,” Shires said. “In the past local organizers just took 500 images and each city would receive the same images back as posters. Now, it is being mixed up and the images will be sent to different countries around the world. About 15 to 20 portraits will end up in their original city, but we don’t know which ones they will be.”

About 200 people have already been photographed at an open call at Hongdae Park on Saturday. Some 13 volunteers helped recruit passers-by and take pictures.

Korean, Chinese, Taiwanese, Singaporean and Indonesian people were among those being snapped against the required whiteboard background.

They will hold another open call at the same park on July 1 from 12-7 p.m.

For that day, the Seoul organizers are seeking photographers to help take pictures, people from all backgrounds that want to be photographed and Korean/English translators to help the project reach a larger audience.

Volunteers may also step forward to help paste the 500 posters around Seoul on Sept. 21 and 22. The first step will be to spell out the words “World Peace” with some of the posters as part of a global action on Sept. 21.

“After the posters are put up they go into the public domain,” said Rico.

“Whatever happens to them is ok, whether they are affected by the weather or people take them or make art with them ― it is up to them. They will just become part of the city.”

Although they have already raised the $1,600 required to cover the Seoul contribution, the pair are still fund-raising to give more to the project’s collective Internet crowd-funding account.

Donations can be made at www.kickstarter.com/projects/iopbethechange/inside-out-project-be-the-change-a-global-action for the fund-raiser which aims to reach $30,000 by July 18 in order to cover the full cost of the global project.