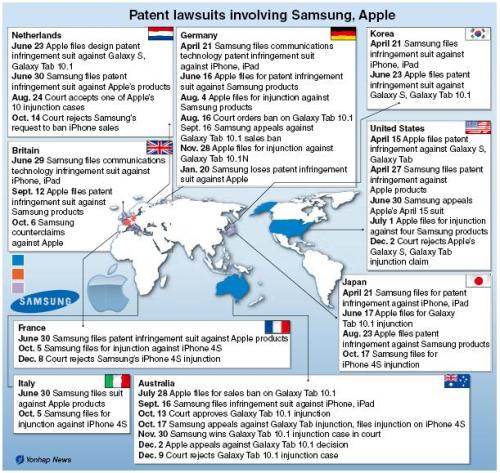 
Attention is on a German court’s second ruling regarding Samsung Electronics and Apple Inc.’s ongoing patent dispute, scheduled to be made this Friday.

This comes shortly after Samsung lost a patent infringement suit against its American rival over third-generation wireless telecommunications standards at a Mannheim court in Germany last Friday. The ruling was the first in a series of patent cases the two firms have filed against the other in Germany.

Following the coming decision on Friday, a third ruling involving a patent infringement case filed by Samsung will be made on Feb. 2.

If Samsung claims victory in either of the two remaining patent fights in Germany, sales of Apple’s flagship iPhone will be banned until an appeal. It would be the first such case of its kind globally.

“We’re keeping our hopes up for the court’s decision this coming Friday,” said a Samsung official.

In related news, it was reported that Apple filed another suit against Samsung in Germany only a few hours following the decision reached in Mannheim, claming that Samsung’s Galaxy Nexus infringes on its “slide-to-unlock” feature.

The Cupertino-based Apple claims it obtained a “utility model” registration for the feature in Germany in 2006 and patented it with the U.S. Patent and Trademark Office in October 2011 after introducing it on the first iPhone in 2007.

The Galaxy Nexus is the most representative gadget in Google’s Android alliance with Samsung, being positioned as the first phone powered by Android’s latest Ice Cream Sandwich mobile platform.

“The Galaxy Nexus is an ‘Android lead device’ for the latest Android version, which makes it particularly key to Google’s strategy,” the Munich-based intellectual property analyst Florian Mueller wrote on his blog FOSS Patents.

The Mannheim Regional Court is expected to make some kind of a decision ― possibly a ruling ― on the issue on March 16, said Mueller, who was the first to report Apple’s claim against the Galaxy Nexus.

A Samsung official in Seoul, however, said that its legal team confirmed that Apple has not filed suit against the Galaxy Nexus as it was not included on Apple’s list of products that allegedly infringe on its patents.

“We’re aware that there was a hearing involving Apple’s slide-to-unlock feature after our patent infringement case last Friday and a series of products in the Galaxy lineup were accused there, but what we’ve discovered is that the Galaxy Nexus wasn’t one of them,” the company official said.

Germany has become a key country for the lawsuits between Samsung and Apple over wireless technologies, designs and user interfaces since Apple first accused Samsung of copying its products last year.

Due to Germany’s comparatively fast and inexpensive legal process along with its specialized patent-infringement chambers, it has become a popular destination in Europe for many litigants, including Samsung and Apple.

However, it is not the only nation where lawsuits that date back to last year are taking place.

The two rivals are fighting each other in about 30 different patent battles in nine countries, which are Australia, the U.K., the U.S., Japan, France, Italy, the Netherlands, Korea and Germany.

“So far, Apple’s and Samsung’s claims against each other have had a very high drop-out rate in multiple jurisdictions. That, however, does not appear to dissuade both parties from pursuing their claims,” said Mueller. “There’s too much at stake and as long as neither party has leverage, there’s no pressure to settle. Apple and Samsung are currently the most profitable wireless device makers in the world.”