The Uncommon Life of Wendy Wasserstein 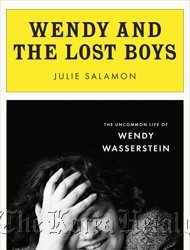 Wherever Wendy Wasserstein went, women came up to her and wanted to talk about her struggles to find a meaningful balance of work, love and family ― all the while being thin.

In plays like the Pulitzer- and Tony-winning “The Heidi Chronicles” and her autobiographical essays, Wasserstein unerringly tapped into the innermost yearnings of baby boomer women. She created a persona so warm and endearing ― the Yiddish word is “haimish” ― that strangers thought of her as a sister, daughter or friend.

Now, in the first major biography of the playwright since she died of cancer in 2006 at age 55, veteran journalist Julie Salamon presents a thorough and engaging account of a complex, driven woman who was a fiercely loyal friend yet manipulative and selfish; seemed like an open book but hid her deepest sorrows; satirized the nouveau riche but relished the perks of success.

Salamon begins in Brooklyn, where Wasserstein grew up, the youngest of five children of upwardly striving immigrant Jews. Her mother was a key figure, needling the chubby girl incessantly about her weight and other perceived shortcomings, yet shamelessly bragging about her children’s accomplishments and teaching them, by example, to bury the things that caused pain or shame.

Wasserstein’s talent was evident from an early age, but she was not a stellar student. Tormented by self-doubt, she struggled to find an identity in her competitive family whose best-known member after Wendy was probably Bruce, the legendary financier who died at 61, just three years after his baby sister.

It wasn’t until Wasserstein started taking drama classes at Mount Holyoke College and later, The City College of New York and the Yale School of Drama, that she realized the theater could be an outlet for her burgeoning ambition.

She used her own life as material, capitalizing on a pitch-perfect memory for dialogue and a sharp eye for detail. Later, when her plays started being produced, friends would see them and feel as though she had plagiarized their lives.

When she died, Wasserstein, who was named by her oldest sister for the Wendy character in “Peter Pan,” was eulogized as one of the pre-eminent observers of well-educated, affluent, ambitious boomers like herself. Salamon ably captures Wasserstein’s conflicted longings and those of an entire generation whose members, like Peter Pan, didn’t want to grow up.