Nomura Securities issued a report Friday that the majority of chip makers are incurring losses on the current dynamic random access memory prices, which tumbled in recent months, adding that their earnings could be far lower than expected in the third quarter.

Nomura said only Samsung’s particular line based on its 3xnm technology is selling for a small profit while spot prices are diving at a rapid pace, undercutting chip makers’ bottom lines. 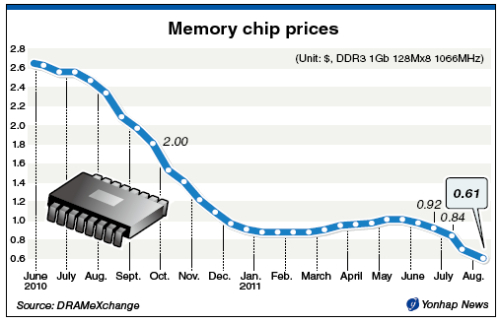 DRAMeXchange, a market researcher for semiconductors, said the price for the benchmark DDR3 1Gb memory stood at $0.61 for the first half of August, down 18.7 percent from $0.75 in the latter half of July. The latest quote marks an all time low since the chip first hit the market in 2009. It peaked at $2.72 in May last year before starting a downward trend without any meaningful sign of recovery.

Given that the production cost for the chip is estimated at between $1 and $1.2, DRAM industry chip makers are selling their products at a loss.

On the memory spot market in Taiwan where traders gauge the future direction of prices, the benchmark memory chip was quoted at $0.55, suggesting that a quick turnaround in prices is unlikely.

The export-import report issued by the Bank of Korea on Friday shows that export prices for DRAM plunged 65.7 percent in July from a year earlier.

With details of the meeting tightly guarded, analysts said that Lee’s attention to the embattled chip business could see a shift in strategy.

Samsung officials, however, downplayed speculation that Lee’s meeting with division chiefs was not directly related to the latest drop of the DRAM prices.

U.S.-based IC Insights Inc. said Thursday that Samsung accounts for a 15.1 percent share in the global semiconductor market, with a gap with Intel Corp. widening.

The weakening prices of DRAM memory also hammered Hynix, whose global market share slid to 4.6 percent in the first half of this year, down from 5.2 percent a year earlier.