The central bank had projected an inflation rate of 3.9 percent in April.

The government, which had originally projected that consumer prices would rise by around 3 percent this year, changed its outlook for this year’s inflation rate to 4 percent on June 30.

In its economic outlook for the second half of the year, BOK said that consumer prices would increase by 3.8 percent during the period, pushing up the average for the year to 4 percent.

The central bank had earlier projected that the second half would see an inflation rate of 3.6 percent.

Regarding Korea’s gross domestic product, the BOK moved its projection in the opposite direction, lowering it from the 4.5 percent projected in April to 4.3 percent in Friday’s report. 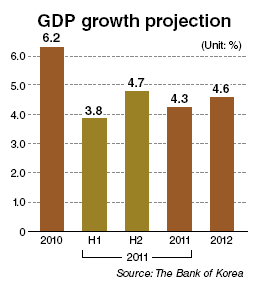 The central bank’s new GDP growth projection is 0.2 percentage points lower than that of the government, which had originally set the figure at around 5 percent.

However, the central bank’s new report was more optimistic about employment. The report showed that the BOK projects that 300,000 people would become employed during the second half of the year, pushing up the bank’s estimate for the year to 350,000. According to the central bank, the number of employed Koreans rose by 410,000 during the first six months of the year.

In April the central bank had put the figure at 260,000, and the unemployment rate at 3.6 percent.