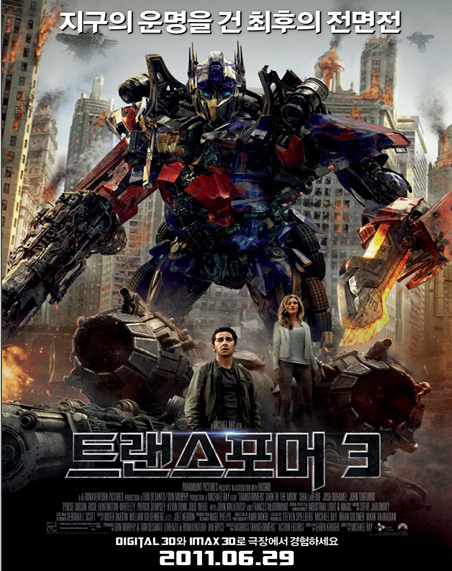 LOS ANGELES (AP) _ ``Transformers'' robots have lost some of their money-making power but delivered the biggest opening weekend domestically so far this year.

Distributor Paramount Pictures said Sunday that ``Transformers: Dark of the Moon'' took in $97.4 million domestically in its first weekend. That beat the $90.2 million debut of Disney's ``Pirates of the Caribbean: On Stranger Tides.''

But the domestic haul for the sci-fi sequel was down from the $109 million first weekend for 2009's ``Transformers: Revenge of the Fallen.''

Since opening Tuesday night, the new ``Transformers'' pulled in $162 million domestically through Sunday, a drop from $200.1 million for ``Revenge of the Fallen'' in its first five days.

Paramount estimates ``Dark of the Moon'' will hit $180.9 million domestically by the end of the long Fourth of July weekend Monday.

``Dark of the Moon'' added $210 million overseas, giving the movie a worldwide total of $372 million through Sunday.

The movie broke the three-day Fourth of July weekend record for domestic revenue previously held by 2004's ``Spider-Man 2'' at $88.2 million. But factoring in today's higher admission prices, ``Spider-Man 2'' sold more tickets than ``Dark of the Moon.''

The movie also set a record for IMAX releases, delivering the large-screen format's first-ever $20-million-plus opening globally. The company estimates that ``Dark of the Moon'' will reach $22.5 million at IMAX theaters worldwide by Monday.

The third ``Transformers'' flick reunites Shia LaBeouf and director Michael Bay, who gave the franchise the 3-D treatment for the first time as NASA's 1960s moon landing becomes a pivotal event in the ongoing war between the giant shape-shifting Autobots and their evil counterparts, the Decepticons.

Sixty percent of domestic revenue and 70 percent of overseas cash came from 3-D ticket sales. That was a boost for 3-D business, which had slipped to 50 percent or less of revenues on some recent releases.

``On Stranger Tides'' passed a global milestone, becoming the eighth movie ever to top $1 billion in worldwide ticket sales. It joined such billion-dollar-plus smashes as ``Avatar,'' ``Titanic,'' ``The Lord of the Rings: The Return of the King'' and ``Pirates of the Caribbean: Dead Man's Chest.''

While that's good news for Disney on its ``Pirates'' franchise, the studio lost mileage in the second weekend for its Pixar Animation tale ``Cars 2,'' which slipped from the No. 1 spot to second-place with $25.1 million domestically from Friday to Sunday.

That marked a steep 62 percent decline from the movie's $66.1 million opening weekend, a sign that ``Cars 2'' may not go the usual distance for Pixar films, whose revenues typically are down a modest 30 to 40 percent in the second weekend.

``Cars 2'' received unusually poor reviews for Pixar, which until now has had a perfect track record, scoring critical and commercial successes with such gems as ``Up,'' ``Ratatouille,'' ``Finding Nemo'' and the ``Toy Story'' films.

Still, ``Cars 2'' has cruised to hit status, taking in $116 million domestically and $198.3 million worldwide through Sunday.

Tom Hanks and Julia Roberts had a modest opening for their back-to-school romance ``Larry Crowne,'' which came in at No. 4 with $13 million domestically.

The Universal Studios release was directed and co-written by Hanks and features him as a downsized retail worker who enrolls in community college, where he falls for his jaded public-speaking teacher (Roberts).

The weekend's other new wide release, 20th Century Fox's European adventure ``Monte Carlo,'' opened a weak No. 5 with $7.6 million domestically. The movie stars Selena Gomez, Katie Cassidy and Leighton Meester as American travelers who get the princess treatment in Monaco after Gomez impersonates a European heiress.