Mortgages make up 66% of household loans

Home-backed loans extended by local banks reached 284.5 trillion won ($253.3 billion) as of the end of 2010, accounting for 65.9 percent of an outstanding 431.5 trillion won in total household lending, according to the data by the Bank of Korea.

The figure the highest percentage of mortgage loans to total household lending since the BOK began compiling related data in the fourth quarter of 2003, the central bank said.

The mortgage loan ratio has been on the rise for the past 10 consecutive quarters since the third quarter of 2008, the central bank added.

The percentage may grow further in the first quarter of this year, given fast growth of home-backed loans shown in January, the central bank noted.

In January, banks’ mortgage lending grew by 1.5 trillion won while total household loans declined by 200 billion won, further driving up the home-backed ratio to 66.3 percent as of end-January, according to the BOK. 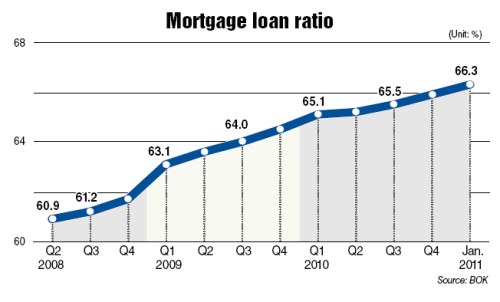 The financial sector’s total mortgage lending, which includes loans by non-banking lenders as well as those by banks, reached 357.5 trillion won as of the end of last year, representing 60 percent of the total 595.9 trillion won lending to households, the bank noted.

The data came after the country unveiled on Tuesday a set of measures to limit home loans as mushrooming household debts are feared to pose a threat to the overall economy.

The loan ceilings had been temporarily suspended since last August as the country struggled to buoy the slumping home market. (Yonhap News)