During the 2008-09 economic crisis, many companies curtailed their costs, their workforces and their investments as they strove to survive the worst global slowdown since the Great Depression of the 1930s.

Merck Korea, the local unit of the world’s oldest chemical and pharmaceutical firm, was one of the few that persisted in investing.

The firm at the time made a decision to launch a new 11 million euro ($16 million) research and development center in Pyeongtaek, Gyeonggi Province, which opened last May.

Merck Korea president Juergen Koenig, who has been leading the bold drive since taking the post in 2008, said this was because the firm believed in the potential of the Korean market.

Like the Korean word for crisis, “wigi,” which is a combination of danger and opportunity, Koenig said the firm considered the hardship a fresh chance for growth.

“We thought we had to invest in the R&D center and get ready for the post-crisis period. Merck is driven by innovation and is very customer-centric,” Koenig told The Korea Herald.

“We had put in different strategies for each division during the crisis situation and they went very well.”

Part of the firm’s success also comes from the veteran Brazilian-German leader who has an international career background which covers Brazil, Germany and Pakistan.

“I was always posted in markets where difficulties were present ... So the crisis was a ‘business-as-usual’ situation for me,” he said. 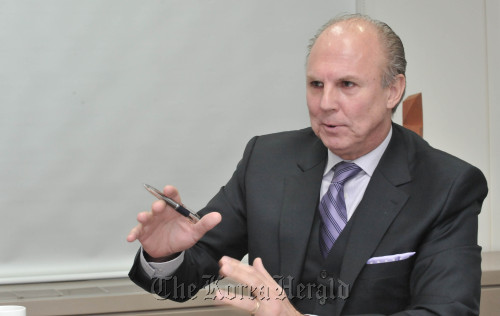 Based in Germany, Merck is a provider of liquid crystals to market leaders including Samsung Electronics and LG Display, as well as a producer of multiple high-tech pharmaceuticals.

Koenig considers Korea “a place where major players should be present.”

The firm’s location in the country is strategic as it is home to leading display producers and a prospective pharmaceutical market which is due to grow further, Koenig said.

The Korean market is particularly appealing to the German firm due to its people’s ongoing pursuit of advanced technologies in both the pharmaceutical and chemical sectors, according to Koenig.

“Korea is a high-tech country (whose people have) high expectations and Merck is willing and prepared to participate in those expectations,” he said.

Merck has been largely concentrating on boosting R&D in organic-light emitting diodes for its chemical business at Merck Advanced Technology Center and clinical trials for the pharmaceutical sector.

An OLED is an LED which has a layer of organic semiconductor material as the emissive electroluminescent, thus emitting less light than an inorganic solid-state based LED. OLEDs are used in television screens, computer monitors and smart devices.

The firm is also carrying out research on pharmaceutical clinical trials here with major general hospitals including Severance Hospital of the Yonsei University Health System and Asan Medical Center.

Koenig, however, said the Korean pharmaceutical market can be bigger than it is.

“The local pharma market only accounts for 6.6 percent of the country’s total GDP (as of 2009). It is bit lower than the OECD average, which is 9 percent,” he said.

And with corruption regarding rebates on pharmaceuticals decreasing in the local industry over the years due to stricter punishment, Koenig had an upbeat view of the market.

Juggling its chemical and pharmaceutical businesses, instead of adopting a common “selection and concentration” strategy, since starting as a small pharmacy in Darmstadt more than 300 years ago has been a key strength of Merck, Koenig said.

“The (Merck) family has decided to keep both businesses under its umbrella and has been stressing the balance of the two. And it has turned out to be a great way for risk management as well,” Koenig said.

The firm, whose majority of shares is still owned by Merck family members, is a highly respected firm in Germany.

Though the family members do not get involved in managing the company, they put forward strategies and direction for the firm through a family council.

According to Koenig, the two divisions, being operated in a distinct business environment, have so far successfully compensated one another’s losses.

“Profits from one sector are usually invested in the other to maintain a balance. It was what happened with our recent acquisitions of Serono and Millipore, too,” he said.

To even out the enlarged size of its chemical business with its pharmaceutical one, the firm last year acquired Millipore Corp., a leading life sciences company based in Massachusetts, U.S., for $7 billion.

For Merck’s active business in the country, Koenig was awarded a presidential commendation at the Korea Investment Awards from the Ministry of Knowledge Economy in November.

Alongside investments in R&D, Merck Korea has been making efforts to serve society through its green technology initiatives and a number of corporate social responsibility programs, Koenig said.

In pursuit of environmental-friendliness, the No. 1 producer of liquid crystals developed ways to recycle them after their devices’ life span.

Instead of disposing of them in Africa or India, the firm invented technology to convert them into materials for building roads and creating energy when being incinerated, for which it holds patents, Koenig said.

The list of its CSR programs includes Merck Awards and Merck Young Scientist Award for Bioscience, through which the firm acknowledges and encourages outstanding scientific contributions.

Merck has also been granting scholarships to medical students at Seoul National University since 2008 and introducing Korean fine art through Merck calendars since 2009.

• Before coming to Korea three years ago, Koenig served as the head of Merck’s operations in Pakistan for eight years since 2001. Before that, Koenig had worked for a BASF unit in Pakistan.

• He holds an MBA in finance and marketing from Vargas University in Sao Paulo, the Brazil. He is a board member of European Chamber of Commerce in Korea.