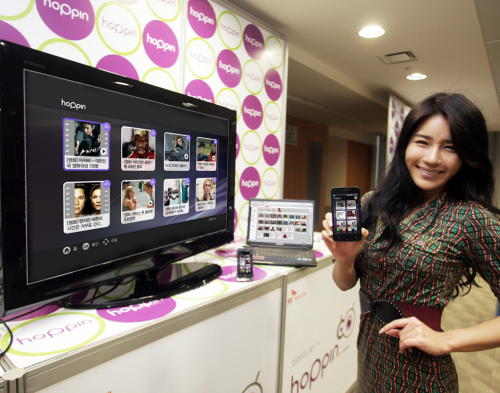 South Korea's largest mobile carrier SK Telecom Co. said Monday that it will release a smartphone that can also serve as a set-top box, playing content on personal computers, tablet PCs and TVs.

The smartphone named "Galaxy S hopping," made by Samsung Electronics Co., will hit shelves in the local market this week, SK Telecom said in a statement.

The new phone represents the company's efforts to tap into the growing demand for the seamless exchange of content on different devices, including smartphones, personal computers, tablet PCs and TVs.

Connecting the new smartphone to the TV will turn the phone into a set-top box, which allows streaming content saved on the phone to be displayed on larger TV screens, SK Telecom said. As they leave the living room, consumers can pick up the movie where they left off on smartphones or other devices, SK Telecom said.

The Galaxy S hopping sports the same features as the Galaxy S, including the Android system and a 4-inch screen.