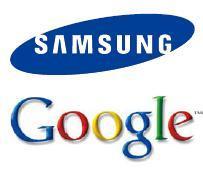 The move came as Samsung’s rival, Sony, is reportedly working with Google and Intel to offer Internet-connected, Android-based TVs, seeking to allow viewers to download and enjoy a wealth of Web content and software as they do on computers and smartphones.

Apple and Google are seeking to take a bite out of the TV market, hoping to expand their influence beyond the mobile arena. Such moves herald a repetition of a race over operating systems and applications, as is currently seen in the smartphone market, analysts said.

“We are considering (developing) Google TVs. We are examining the business feasibility of Google TVs,” a Samsung executive said.

He said the company will decide whether to develop Android-based TVs after details about Google TVs are available.

A Samsung spokesperson said the company is studying Google TVs, and will watch market developments, saying Sony is expected to introduce its Android-based TV possibly late this year.

Chun Seung-hoon, an analyst at Eugene Investment & Securities, said Samsung’s Google TV is plausible, given that Google’s Android is an open platform. “There is no problem for Samsung to produce Google TVs,” he said.

However, he said the hardware manufacturer faces the risk of losing its control over the TV market to Google, a software firm, should it make Google TVs. “This is not a good picture. I think it would be better for Samsung to expand its own platform Bada,“ he said.

Korean TV makers Samsung and LG face an increasing threat from the likes of Apple and Google, which seek to leverage their strength in software to enter the TV market. Samsung and LG, which are the world’s No. 2 and No. 3 handset vendors, are also eclipsed by those rivals, mainly because of their weakness in content and software offerings, analysts say.

However, Kim Kyeong-hyun, a Samsung vice president, downplayed the potential threats by Apple and Google in the TV market, saying Samsung has a manufacturing edge, and the new entrants mainly focus on software.

He added they could be both competitors and partners.

“(Apple and Google) will help expand the TV market,” he said.

In the face of the challenge, Samsung launched the world’s first application store for TVs, dubbed Samsung Apps. Samsung is also holding an application contest to woo developers and secure content.

The move came as TVs are becoming more like computers, which give viewers access to the web.

ISuppli forecast worldwide sales of Internet-enabled TVs will rise to 87.6 million units by 2013, up from 14.7 million in 2009. An estimated 60 percent of total North American flat panel TVs shipped in 2013 are expected to be Interne-enabled TVs.

Meanwhile, Samsung Electronics announced its plan to launch the world’s slimmest TV in the United States this week and in Europe and other countries next month. 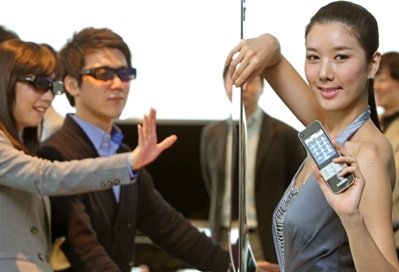 However, in terms of content and software, which are increasingly important not only in handsets but in TVs, the expensive “full HD 3-D LED TV 9000 series” fails to differentiate itself from Samsung’s previous models.

Although the new TV stands out with its ultra-thin profile (7.98-millimeter thick), the new model has similar functions and software with Samsung’s other premium series.

It features a 2-D to 3-D conversion technology, which renders 2-D content into 3-D content. Like previous models, the new product features Samsung Apps, which allows users to download applications onto TVs, and “Samsung internet TV,” which offers Web content such as news, weather, stock information and movies.

Kim said he was confident that the company will be able to achieve its sales target of 2 million units of 3-D TVs, despite consumer worries about health risks associated with 3-D viewing.

He said its research showed that there is little health risk if certain guidelines are met in TV viewing.

Meanwhile, he said the company will join forces with designer brands to promote its new premium TVs. He declined to identify them, saying talks are under way.
By Jin Hyun-joo (hjjin@heraldcorp.com)