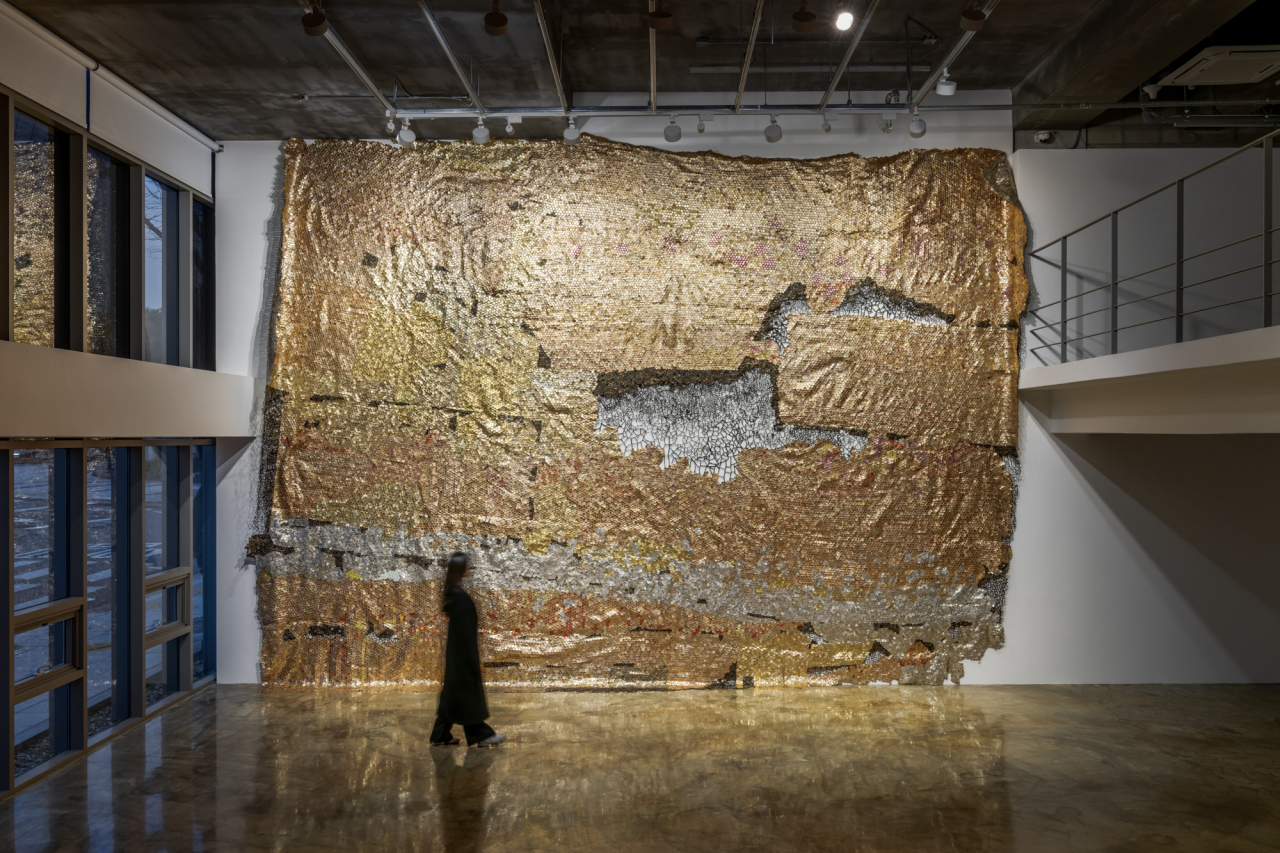 A golden tapestry-like assemblage shimmers on a wall struck by light coming through a large glass window. The 6-meter-tall installation “New World Symphony” is a new work created by acclaimed Ghanaian artist El Anatsui for his second show in Seoul at Barakat Contemporary.

It is hard to tell that the shimmering comes from light hitting numerous small bottle caps unless one takes a very close look. Bottle caps have been a significant art medium for the artist since the late 1990s. It is also the result of the collective work of villagers in Africa.

“El Anatsui: Day after Night," the artist's second show, follows the first exhibition “El Anatsui: Topology of Generosity” that was held at the Seoul-based gallery in 2017. The second show brings together massive bottle cap sculptures and colorful wooden relief pieces as well as monoprints from the patterns in carvings to Korea for the first time.

“The bottle cap sculpture ‘New World Symphony’ is quite large in scale, which is almost a museum scale and was created for the exhibition at the gallery. As for the wooden reliefs, the artist worked on the series in the 1990s but recently started it again -- the wooden panel piece ‘of Realities and Illusion’ was created this year and is being shown for the first time,” Kaiah Lee, a director at Barakat Contemporary, said at the press preview on Wednesday.

Anatsui bridges the traditions of visual arts of Ghana and the West, reflecting a keen awareness on the issues in contemporary lives. In 2015, the artist won the Venice Biennale Golden Lion for Lifetime Achievement. His artworks are housed in a number of institutions including the British Museum, London; Centre Pompidou, Paris; Metropolitan Museum of Art, New York and Smithsonian Institution, Washington.

The discovery of littered bottle caps from bushes near his studio in Nigeria in 1999 led the artist to transform the seemingly useless items into works of art.

“Each and every individual has a particular style that works for him. So the biggest challenge is to discover that. It is only by persistence that you will understand the language and qualities of that medium and be able to speak with it,” Anatsui said in a previous interview with The Korea Herald in 2017.

The exhibition runs through Jan. 29.