[James K. Galbraith] Think again about inflation and the Fed 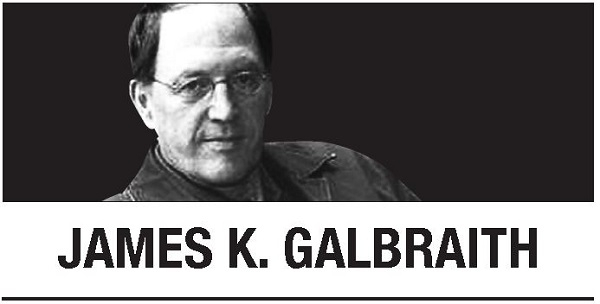 Two days after the midterm elections in the United States, the Financial Times reported that US inflation has slowed, markets are “giddy,” and the Federal Reserve may now ease up on its interest-rate hikes. The timing was strategic, given that the push from oil prices ended in June, and that overall price changes have been low since July. With the election over, it seems, now it is safe to admit the facts.

Just this past August, Harvard economist Jason Furman wrote that “underlying inflation” in the US was “more likely to be rising than falling,” and that the Fed would “need to stick to its plan of rapid interest-rate hikes.” I replied that the “persistence of headlines doesn’t mean that price increases themselves are persistent,” and perhaps “the great inflation scare is already past.”

I wasn’t alone. About a year ago, the professional economists at the Fed appear to have made a similar prediction. Harvard economist Kenneth Rogoff attacked them in May 2022 for thinking that the price shock might be temporary; I countered that the Fed employs “sensible technicians” who “might well have expected price stability to return (at the new levels).”

The latest producer price index provides evidence on this point. According to Reuters: “Excluding food and energy, goods prices dipped 0.1 percent, (which) followed an unchanged reading in September. The department’s consumer inflation report last week showed consumer core goods prices also declined in October.” Who was right? We were.

Since February 2021, former US Secretary of the Treasury and Harvard economist Lawrence H. Summers has been beating the inflation drum. Summers’ arguments back then rested (strangely) on worries about excess savings, on “Federal Reserve debt purchases,” and on “soaring stock and real estate prices.” He was not focused on the price of oil, which tripled in 2021 and spiked again in the spring and summer of 2022.

I am not an inflation dove, but I favor anti-inflation policies that actually work. In June 2021, I conceded that there were some price risks on the horizon. I also pointed out that higher interest rates would increase costs for businesses, which would then pass those costs along to consumers, making the price picture worse in the short run.

Fed Chair Jerome Powell’s crusade against inflation began in January 2022, leading me to warn that, “Once borrowers know that rates are going up over time, they tend to load up on cheap debt, fueling speculative booms in real assets (like land) and fake assets (like... cryptocurrencies).”

That, too, was right. Debt rose in the second quarter and even more in the third. The price of bitcoin increased until late March, after which it fell by about two-thirds. Similarly, the US housing price index peaked in May and has been falling ever since. The yield curve is now inverted -- meaning that short-term interest rates on Treasuries are higher than long-term ones -- a strong sign of more trouble ahead.

Powell and the Fed did not conquer inflation. The White House did, by selling oil from the strategic petroleum reserve to bring down the price of gasoline -- at least for the time being. Declining gasoline prices have caused other prices slowly to level off. To be fair, the Fed can be credited with puncturing ultrahigh leverage, speculative, overblown sectors such as crypto, which should have been regulated out of existence long ago, and, of course, with the slump in housing starts.

What will come next? In a July 2007 study of the Fed’s behavior between 1983 and 2006, I and two co-authors found no evidence that the central bank reacted predictably to inflationary pressures -- possibly, in part, because there weren’t many in those years. Instead, it reacted to high employment, regardless of whether that metric had any effect on prices (which it didn’t).

We also found a striking partisan political bias in monetary decisions. During the period we studied, after accounting for both inflation and jobs, interest rates were sharply higher (and yield curves flatter) in presidential election years when the Democrats held the White House. In every model we ran, this bias was substantial.

There is nothing surprising about this -- once one discards the myth that the Fed operates like a nonpartisan priesthood. America’s central bank is dominated by partisan Republicans from the business class -- in financial circles, at the regional Federal Reserve Banks, and on the Federal Reserve Board, where Democratic presidents habitually reappoint Republican chairs -- as Bill Clinton did with Alan Greenspan, Barack Obama with Ben Bernanke, and Joe Biden with Powell. Democrats who serve are habitually nonpartisan -- or hard-liners projecting an image. The result is that pressure for tight policies hits harder when Democrats are in power than when Republicans are.

If the Fed continues to heed the eminent Harvard economists, there could be a deeper unraveling next year. That would be bad, especially if crypto or developments in Europe trigger a larger financial crash. But, as post-election hints from the financial press suggest, the Fed might now decide to ease up and claim a victory over inflationary pressures that were always temporary. If it does, labor-market conditions may remain tight.

And if that happens, and if my 15-year-old model of the Fed’s behavior still has predictive power, the hawkishness of the past year will have been just a warm-up. The real crusade against “inflation” will start when the presidential race gets underway in late 2023 -- just in time to do maximum economic and political damage.

James K. Galbraith, chair in government/business relations at the Lyndon B. Johnson School of Public Affairs at the University of Texas at Austin, is a former executive director of the congressional Joint Economic Committee. -- Ed.