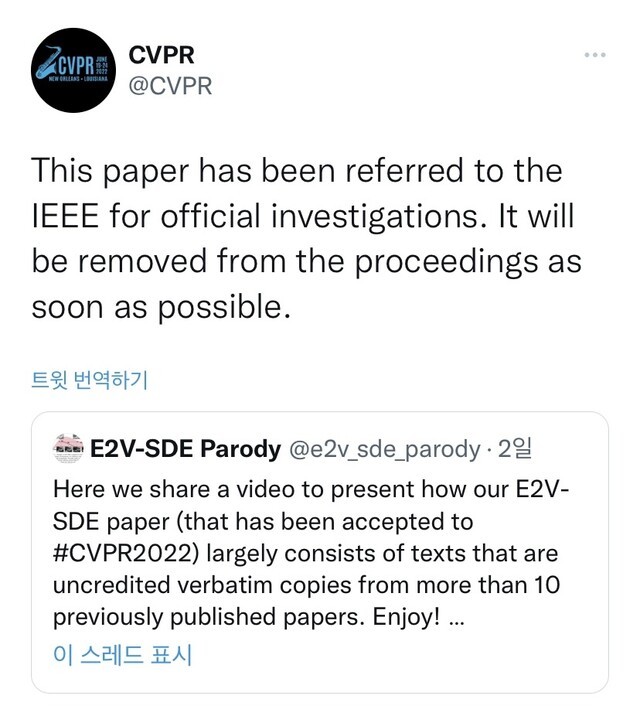 A research team under Seoul National University admitted to submitting a plagiarized paper at an international conference after accusations spread online.

The team, led by professor Yoon Sung-roh from the prestigious Seoul National University, submitted a paper at the Conference on Computer Vision and Pattern Recognition held earlier this week in New Orleans.

Yoon was the head of the Presidential Committee on the Fourth Industrial Revolution during the Moon Jae-in administration.

The paper, titled “From Asynchronous Events to Fast and Continuous Video Reconstruction via Neural Stochastic Differential Equations,” discussed how artificial intelligence can be used for information data analysis.

Yoon participated in the paper as the corresponding author, and a Ph.D. student at his lab was the first author. There were three more co-authors of the paper.

The paper was recognized at the conference and published officially Thursday.

But the next day, a video was uploaded on YouTube claiming the paper had been plagiarized and contained copied text from 10 previously published papers without proper credit.

After the accusations went viral, someone claiming to be the first author commented on the video admitting to plagiarism.

“All the faults of the paper are entirely mine, the first author. I think it is right for me to accept all criticism fully. I agree with the belief that plagiarism is absolutely unforgivable, and I will accept any disciplinary action without any excuses,” the comment read.

Yoon said he was unaware of plagiarism in an interview with a local media outlet, adding the plagiarism was an “individual act” by the student. He said he will call on Seoul National University to hold a disciplinary committee hearing.

The conference also announced it had referred the paper to the Institute of Electrical and Electronics Engineers for an investigation.

“(The paper) will be removed from proceedings as soon as possible,” CVPR announced through its social media account on Friday.

The university said Sunday its committee on research integrity would look into the matter for further investigations from Monday.