Despite holding $85b in cash, tech giant struggles to find new growth drivers amid internal, external challenges. Experts have mixed views on the heir’s absence in steering the empire.

By Son Ji-hyoung
Published : May 8, 2022 - 15:46       Updated : May 8, 2022 - 15:51
Even as it reported record revenue over the last three quarters, shares in Samsung Electronics have fallen over the past year, indicating weak market confidence in the tech giant’s prospects as inflation and Russia’s invasion of Ukraine threaten the general economy.

Not all is well at the company, despite the strong bottom line.

The memory chip business is suffering from weak pricing, and its chip foundry investments are lagging behind rivals TSMC and Intel. Meanwhile it is still struggling to get an edge over US players in the processor chip business.

Worse, its latest Galaxy S22 smartphone suffered a backlash over accusations it had used software to inflate the performance of the device.

But as its share price hits new yearly lows, a lack of long-term investment and vision was at the center of concerns.

Business circles here have blamed, among others, an apparent leadership void for the current challenges facing Samsung Electronics because Vice Chairman Lee Jae-yong is technically not employed by the company.

Lee, 53, who was freed from prison in August last year after serving about 18 months for corruption, faces employment restrictions for five years.

He cannot take a job at Samsung, so he remains an unpaid, unregistered director. Some experts view the lack of major investments as a deliberate response to his legal situation.

President Moon Jae-in has not issued a pardon for Lee, despite industry-wide calls for one.

However, there are still hopes of a pardon after President-elect Yoon Suk-yeol, a conservative leader who vows to create a business-friendly environment, takes office this week.

Lee’s delayed return sheds light on the debate as to whether his limited role is really slowing down the decision-making process at Samsung, especially on mega deals crucial for its fast-growing chip business to find a new growth driver.

Regardless of Lee’s position, there are some signs that the tech giant is scrambling to address its lack of investment.

To some experts, this is coming too late. Upon Lee’s release last year, Samsung announced a three-year plan to invest $206 billion in semiconductors, biopharmaceuticals, artificial intelligence and robotics.

But other than the $17 billion chip factory in Taylor, Texas, unveiled in November, the company has not made any high-profile investments for almost a year.

As of the first quarter this year, Samsung Electronics’ net cash came to 107 trillion won ($84.5 billion). This financial ammunition, which can double with financial leverage, has remained largely unchanged over the past year.

“Samsung has yet to establish either a group-wide decision-making mechanism, or a decision-making unit under each affiliate, which would be equivalent to the now-defunct Future Strategy Office,” said Lee Bong-eui, a law professor at Seoul National University, speaking about the conglomerate as a whole.

“Samsung is in a precarious situation where decisions are unlikely to be made in an orderly fashion.” 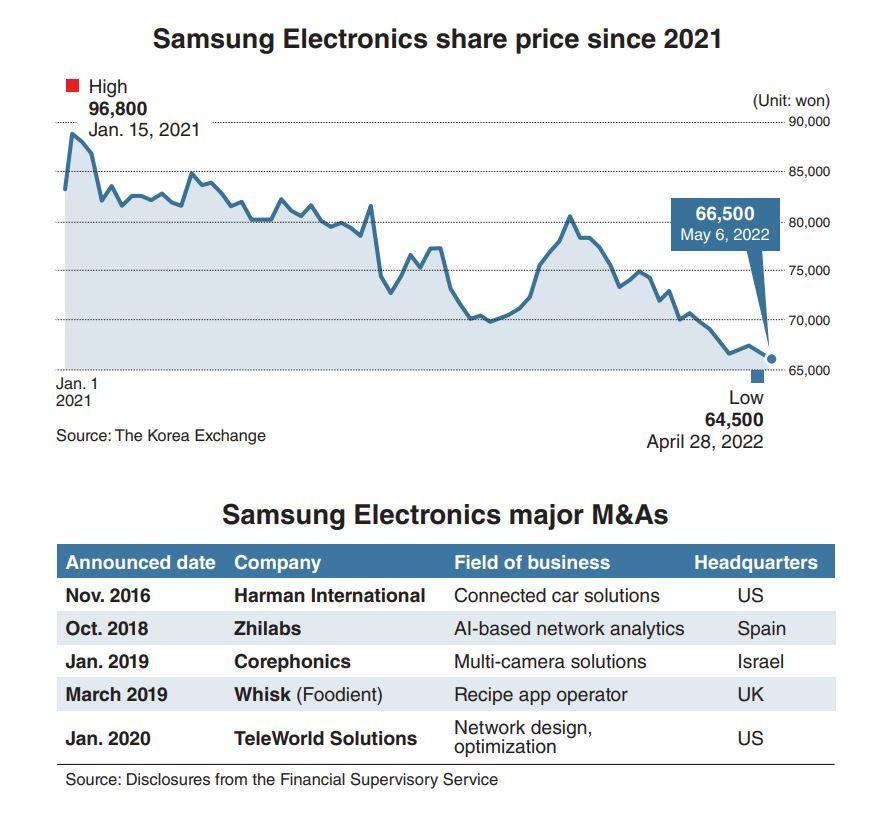 Lee took the helm from his father, the late Chairman Lee Kun-hee, in 2015, pledging to reform corporate culture to create a more flexible, younger one that mimicked those of Silicon Valley startups.

The $8 billion acquisition of Harman International, an audio and connected technology firm for cars, was the first major deal signed under his leadership.

A few months after the Harman deal was closed in January 2017, however, Lee was indicted over an influence-peddling scandal that led to the unprecedented impeachment of former President Park Geun-hye.

Lee was sentenced to five years in prison in August 2017 on bribery and embezzlement charges. He was released from prison after less than a year when an appeal court threw out some of the charges, but sent back to prison in January last year after being sentenced to 2 1/2 years in a retrial.

He was granted parole in August. For the last five years, Samsung announced no major deal to amplify the tech empire’s growth engine. The delay in investment appears to be seen as a classic chaebol maneuver or a veiled plea for clemency, according to professor Lee of SNU.

“We’ve often witnessed that chaebol have been restrained from announcing large-scale investment plans when they are either on trial in a court, in jail or on parole, in a ploy to make the case for a presidential pardon.”

But the deals have stopped short of convincing Samsung shareholders that the tech giant has a clear growth strategy.

Samsung Electronics’ common share price dipped over 15 percent from January until Friday. As a result, 62 trillion won of market cap evaporated over the same period.

Without Lee’s return, Samsung has no other choice but to stick to a professional management system.

But experts say this system has disadvantages in long-term goal setting compared to being led by an owner family.

“Professional managers are forced to remain focused on short-term goals and immediate profits as they require approval from the shareholders in every two years,” said Kim Dae-jong, professor of business administration at Sejong University.

“In contrast, entrepreneurial management by an owner family tends to nurture long-term investment decisions, regardless of whether the decision leads to a loss in the short term.”

Kim added the professional managers at chaebol tend to lack professional networks their owners have, and in effect act as front men with limited power in business meetings, while owner families decide things and make personal connections with key figures.

For example, Samsung’s latest 5G network equipment supply deal with US mobile carrier Dish Wireless reportedly started when Lee went hiking with Dish Chairman Charlie Ergen in Korea last year. According to Kim, professional managers would not have that kind of access to company chairmen.

Some experts, however, claim Lee made his comeback with his parole last year, and there is no need for Lee to be pardoned.

Pardoning Lee would be “nothing but clearing his criminal record,” said Park Sang-in, economics professor at Seoul National University. “Lee is effectively doing business activities for Samsung as he is on parole.”

According to Park, the lack of growth driver in Samsung largely stems from its unique vertically integrated structure that aims to maximize efficiency and cost-cutting by producing everything from parts to finished goods.

The structure may have been effective in labor-intensive and resource-heavy industries, but the strategy has stifled more sophisticated, innovative sectors like chip design.

“Samsung has often absorbed chip design challengers, depriving them of the chance to disrupt the whole industry and to create a diverse chip design ecosystem,” he said.

“The nation’s chip innovation will thrive when Samsung ditches the illusion of vertical integration.”