Stable recovery forecast for Korea in 2022

“We believe that sufficient vaccine supply and South Korea’s capacity to quickly rollout booster jabs will ensure a recovery in private consumption and business investment spending,” Fei Xue, an Asia analyst at the Economist Intelligence Unit told The Korea Herald in an email interview earlier this month.

“A tight labor market and upward pressure on wage growth will also boost domestic demand, which will offset a deceleration in goods export growth -- overall we expect steady economic expansion in 2022, with real gross domestic product increasing by 2.8%,” he added.

Asia’s fourth-largest economy is expected to expand by an average 3 percent next year, according to global and local organizations. The Bank of Korea and the state-run Korea Development Institute both forecast 3 percent growth, while the International Monetary Fund projected 3.3 percent expansion. The Organization for Economic Cooperation and Development and the Asia Development Bank rolled out corresponding figures of 2.9 percent and 3.1 percent, respectively.

A strong momentum of rebound in exports this year will remain as a key catalyst behind economic growth next year, they said. Korea’s monthly exports exceeded $60 billion for the first time in November and are set to surpass the annual record high of $604.9 billion set in 2018 by the end of the year, the Ministry of Trade, Industry and Energy said Dec. 1.

According to the latest data from the Ministry of Science and ICT, semiconductor shipments gained 28.4 percent on-year to $11.23 billion in October, topping $10 billion for the sixth consecutive month. 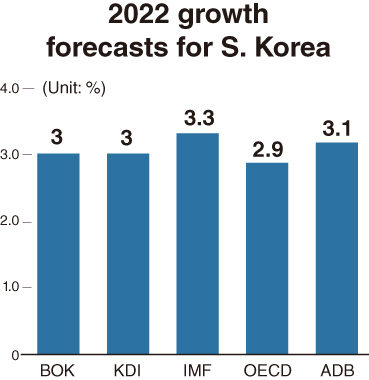 The global supply bottleneck, which has been a major hurdle for global manufacturers and exporters, will be resolved in the semiconductor sector in the upcoming months, another expert said. This could further boost Korea’s exports, but at the same time, could present setbacks for the chip industry as well.

“I am optimistic that the global supply chain problems in the semiconductor sector will be solved in the coming months, meaning that spillovers into chip shortages in the global auto and consumer electronics sectors will ease and quite likely in 2023 may turn into a glut of chips and hence a repeat of the boom-bust cycles in the semiconductor industry,” Jacob Kirkegaard, a nonresident senior fellow at the Peterson Institute for International Economics said via email.

“This will naturally also affect the important South Korean semiconductor sector, which having had very strong export earnings in recent quarters, should slow down in the near term as global supply picks up, and could potentially suffer from a bust in the medium term like the rest of the industry.”

China, which accounts for 20 percent of Korea’s exports, is likely to suffer an economic slowdown next year, hindering Asia’s fourth-largest economy’s exports.

“The anticipated economic slowdown and a shift towards domestic brands in consumer spending in China will exert a moderate dent on South Korean consumer products and automobile exports to that country,” Xue said.

“However, external demand for South Korea’s mainstay exports, including memory chips and electronic devices, will remain strong in 2022 amid a global drive for digitalization, data center construction and build-up of semiconductor production capacity -- these trends will keep South Korea’s outbound shipments at an elevated level.”

Xue also warned of risks tied to an oversupply of consumer electronic products in the global market emerging around the end of 2022, owing to a lack of upgrading demand.

Meanwhile, local experts have picked the March 9 presidential election next year as a key factor that would determine the course of the economy, alongside the global supply chain crisis and the US Federal Reserve’s expected acceleration of the tapering of monthly bond purchases.

“The ongoing global supply chain crisis, high inflation and the US Fed’s tapering are all risks to the Korean economy,” said Lee In-ho, an economics professor at Seoul National University. 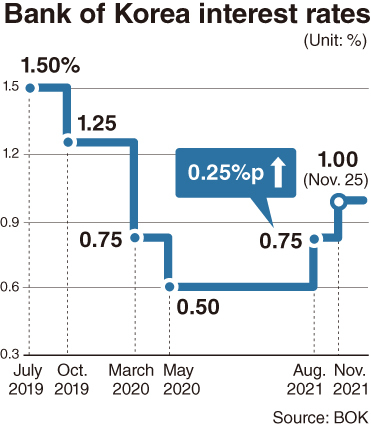 “Next year’s Korean economy will depend on the circumstances surrounding the COVID-19 pandemic and which administration comes to power after the presidential election.”

The South Korean government recently predicted the nation’s inflation to grow at 2.2 percent next year, with high inflationary pressure likely to push the BOK to further raise its interest rate.

“The Bank of Korea is likely to keep pace with the major economies’ monetary policies and inflation,” Shinyoung Securities analyst Cho Yong-gu said.

“It is projected to carry out two interest hikes next year, possibly in January and August, in that sense,” he added.

South Korea’s interest rate is also likely to remain “low” in the future, according to Kirkegaard, despite the nation’s snowballing household debt.

“It is not however high by global standards,” Kirkegaard said, referring to its “natural interest rate” and adding, “South Korea is unlikely to see much inflation in the future, given the very negative demographic outlook the country faces in the coming decades.”

Kirkegaard explained that a “natural interest rate” neither stimulates nor contracts the economy, and is quite dependent on the country’s demographic outlook. South Korea faces a negative demographic outlook with the working age population shrinking, which makes it difficult to generate even low levels of sustained inflation.