In the past 20 years, the number of marriages in Seoul has decreased by 43 percent and the number of births by 64 percent, according to the Seoul Metropolitan Government on Thursday.

The average age of first marriages last year was 33.61 for men and 31.6 for women, up 3.96 years and 4.35 years from 2000, respectively, an analysis released by the city government based on state-run Statistics Korea’s demographic data between 2000 and 2020, showed.

Accordingly, the average age of the parents at their child’s birth increased from 29.49 in 2000 to 33.98. The average time it took for a couple to have their first child after marriage was 2.6 years. 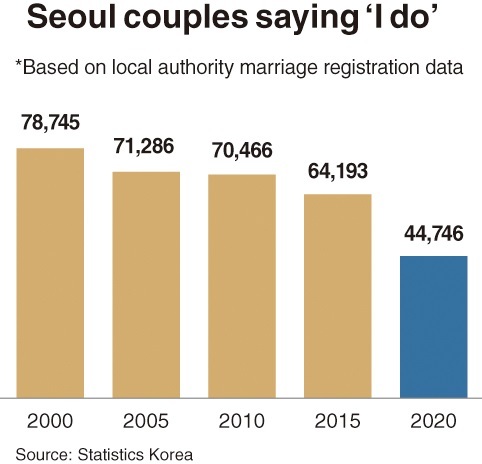 Seoul also had significantly fewer babies born in 2020 than it had 20 years ago. This year, the capital is expected to record the first year in which its population naturally declines, meaning more deaths than births. In monthly statistics, a natural decline has already been observed since July.

While the number of births has decreased, the number of deaths has been steadily increasing due to an increase in the aging population.

Cancer and circulatory system diseases accounted for half of the major causes of death last year. A total of 201 people died from COVID-19 in 2020.