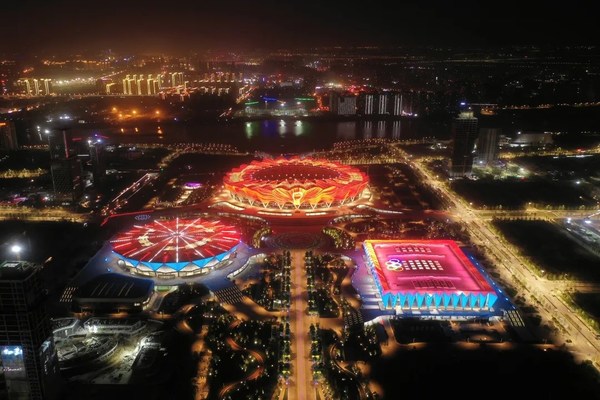 The hosting of the Games is expected to vastly increase the stature of the city in the international arena as a sports event of this importance is not simply a competition between several teams, but also a platform for communication and a stage for demonstration. By seizing strategic opportunities brought about by the Belt and Road Initiative (BRI) and the construction of a new starting point of the Silk Road Economic Belt (SREB), the city is accelerating the development of the sports sector. This will facilitate the integration and allocation of various sports resources with the goal of achieving the coordinated establishment and development of a series of sports-related industries across several provinces and regions, developing communications with countries around the world.

To take an aggressive approach to building out a sports sector is a practical one in that it will serve to make the residents of Xi'an healthier and fitter, as well as enhance the populace's level of happiness and sense that they have really witnessed an improvement in their daily lives.

Xi'an has created enough fitness facilities so that every person living there has a place to engage in physical fitness. Since 2019, the city has built over 10,000 exercise facilities across the city, meaning everyone resides no more than 15 minutes from one. As of March of this year, the city had installed 4,280 exercise machines in Xi'an's rural communities for use by the area's agricultural workers, as well as having paved 2,200 public use jogging and biking lanes while already having staged enough national fitness activities that the annual number of such events should reach some 600 by the end of the year. The number of participants in physical activities of some form or another now accounts for 50 percent of the city's population, while the average workout area available has reached 2 square meters.

Xi'an is also constructing several sports stadiums. The Xi'an Olympic Sports Center, to cite one example, has become a new urban landmark, while key sports facilities such as the Xi'an Sports Training Center, the Xi'an International Football Center and the Xi'an Water Sports Training and Competition Center are also either in the planning stage or already under construction.

Between 2022 and 2025, more than 40 international and domestic sports events will be held in Xi'an every year. Two to three independent events tied to a single sports brand are expected to take place annually in the city by 2025, setting the wheels in motion for Xi'an to become a well-known, top-flight world sports capital by 2035.